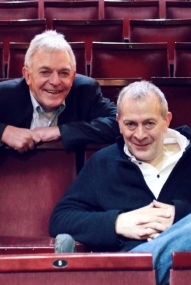 A huge success since opening in the West End last year, Jeeves & Wooster in ‘Perfect Nonsense’, the Goodale Brothers’ ingenious play featuring P.G. Wodehouse’s iconic double act, was recently named Best New Comedy at the 2014 Olivier Awards. Here, co-writer Robert Goodale explains how the idea to adapt Wodehouse’s books came about, and the process by which the play came to the stage.

My first taste of P.G. Wodehouse came in my early twenties when my twin brother and a mutual friend of ours used to quote PGW phrases, sentences and extracts back and forth at each other during late night drinking sessions. I was never sure whether it was the whisky, the Wodehouse or a combination of the two that was making me laugh hysterically, but for years my experience of the great man was confined to the blurry hours of the night.

It was only when looking for material for a one-man show that I picked up a Jeeves and Wooster book in the cold light of day and realised what a comic genius Wodehouse really was. I also discovered that some of his best material was being filtered through the mouthpiece of Bertie Wooster. Here was a storyteller, raconteur and Vaudevillian performer who was capable of charming any group of people into submission. Not only was he a perfect front man, but the characters who peopled his world were gloriously eccentric, mad and passionate, all with their bizarre and peculiar obsessions. Twenty pages into Stiff Upper Lip, Jeeves and I knew that I had my one-man show.

The idea of indulging in a world where the loss of an objet d’art from your silver collection was perceived as being a matter of life and death could not have been more appealing. So I went ahead and performed a couple of one-man shows based on this material at the Edinburgh Festival and roped in my brother David to direct The Code of The Woosters. 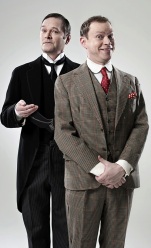 Twenty years later, the two of us were approached by producer Mark Goucher to create another Wodehouse show, but on a larger scale. It dawned on us that if we wanted to keep Bertie as the raconteur we should write a play in which, encouraged by his drinking pals, he would take over a West End theatre and attempt to tell one of his stories in the form of a one-man show. As his loyal valet, Jeeves would naturally accompany Bertie to the theatre and, in the certain knowledge that the show was destined to go horribly wrong, he would have made certain contingency plans. The script almost wrote itself, and we revelled in the idea that the inscrutable and dignified Jeeves might draw on some hidden talents to play a number of the other characters.

We passed ‘Perfect Nonsense’ on to Mark Goucher, did a reading of it for him and in turn the Wodehouse Estate, who gave it their blessing. The wonderfully inventive comedy director Sean Foley was then brought on board, and his inspired suggestions, combined with Alice Power’s brilliant ideas for the set design, helped raise the script to another level.

Although I had absolutely nothing to do with original cast members Stephen Mangan’s or Matthew Macfadyen’s involvement, I was thrilled when they came on board. Having worked with them both at the Royal Shakespeare Company, witnessed their extraordinary comic abilities and observed how well they got on together, there was no question in my mind as to how perfect a pairing they could be.

What was most gratifying about the whole process was that all of the above – along with Mark Hadfield (as Seppings) – were completely in tune with the conceit of the show and a lot of what was discovered in the rehearsal room found its way into the script. A true process of evolution, we like to think.

Nick Hern Books is proud to publish the hilariously inventive script of Jeeves & Wooster in ‘Perfect Nonsense’, winner of the 2014 Olivier Award for Best New Comedy.

Featuring P.G. Wodehouse’s iconic double act, and written for a cast of three (who play multiple roles), this adaptation will suit any theatre company or drama group looking for a comic play to perform.

To get your copy of the script at a 20% discount – no voucher code required – click here.