Today, 27 June 2020, marks the 80th birthday of playwright Nicholas Wright. Born in South Africa in 1940, over the course of his long and illustrious career he has established himself as one of the UK’s most-respected dramatists. His plays have been staged at leading venues including at the National Theatre, Royal Shakespeare Company, Royal & Derngate in Northampton, Almeida Theatre, Chichester Festival Theatre and in London’s West End, as well as internationally. He has also won numerous awards, including the Olivier Award for Best New Play for Vincent in Brixton in 2003.

Here, to mark the occasion, Nicholas reflects on five of his many notable plays, how many of them draw on his own life and experiences, and pays tribute to the many people who’ve helped make his remarkable career possible.

Zoe Waites, Nicola Walker and Clare Higgins in the 2009 revival of Mrs Klein at the Almeida Theatre, London (photo by Tristram Kenton)

I first heard of the psychoanalyst Melanie Klein when I was very young. A friend at drama school invited me around to her house one Sunday: she was Harriet, the daughter of George Devine, the director of the Royal Court Theatre. Her father was living elsewhere and the house – a romantic old place on the bank of the Thames – now revolved around his wife Sophie, a much-respected stage designer who had made it a regular Sunday home for impecunious young people. I went there often. It was my first encounter with English middle-class, semi-bohemian life, and a great education for a young and raw South African.

The presence of the Royal Court was felt throughout the house. Its star director, Tony Richardson, lived on the top floor in a flat containing an aviary peopled by exotic birds including a real toucan. Richardson’s partner was a social worker named George Goetschius: a big bear-like, bearded American, twinkly-eyed, who was said to have formed the Royal Court policy of being ‘a writers’ theatre’. Like all real intellectuals, he had the gift of making everything he talked about sound interesting. He spoke about religion, ethics, social change, always with a dry American wit and, in his hands, psychoanalysis became a labyrinth of infinite fascination. Surprisingly, while working in New York, he had met and got to know Melanie Klein’s estranged daughter, Melitta Schmideberg.

It’s Goetschius’s angle on analysis that I drew on when, many years later, I wrote Mrs Klein. I read Klein’s books and papers and found her thinking difficult but rewarding. It’s more dynamic than the conventional analytic notion of emotions being displaced from one place to another, like water being poured in and out of buckets. With Klein, the relations between us are in a state of flux, transformed this way and that by our perceptions, with the mother always centre-stage in the psychic drama. 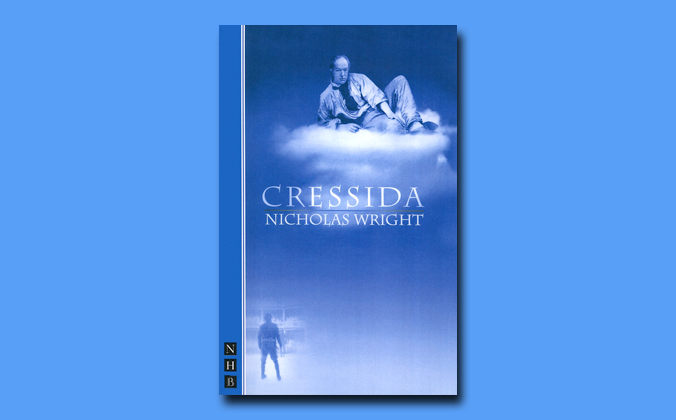 The cover to the playscript of Cressida, published by Nick Hern Books alongside its premiere at the Albery Theatre (now Noël Coward Theatre), London, in 2000, starring Michael Gambon

Cressida is based on my life as a child actor. During the war, while my father was away, I was taught to read by my grandmother and became precociously fluent, so when the local broadcasting company needed a little boy who could sight-read, I was a shoo-in. I made my radio debut at the age of six, after which I was on the air most weeks. At twelve, I gave what I’m told was a chilling performance as the corrupted schoolboy in a stage adaptation of The Turn of the Screw, and by then I knew all there is to know about the joys and pains of pre-pubescent acting, not to mention the cut-throat rivalry that rages between one child-actor and another.

My acting career dwindled away as I got older. Child actors aren’t really acting anyway: they’re simply trying to win approval and, once you reach adolescence, that doesn’t work for you or anyone else. There’s something melancholy about the ephemeral nature of childhood talent and one could say the same thing about theatre in general. Nothing about it lasts, except in memory.

While I was writing Cressida I did a lot of what people call research, though I don’t think of it like that. It’s more like rummaging around until I feel comfortable in the world of the play. That’s how I learned about John Shank’s dodgy practices and Stephen Hammerton’s rise to stardom. I became fascinated by the phenomenon of gender-crossing acting by boys and I wondered what the attraction of it was. Was it their brilliance at impersonating women? Or was something weirder going on: was the cross-dressing in itself an attraction? I also wondered what would happen if a girlish boy, such as I was at that age, were to play women’s roles. Would he be better or worse at the job? That’s one of the things that Cressida is about.

Peter McGovern and Janine Birkett in the 2013 revival of Vincent in Brixton at Theatre by the Lake, Keswick (photo by Keith Pattison)

When I was writing Vincent in Brixton, I had in my mind the painterly contrast between the foggy streets of Victorian London and the incandescent blaze of colour that we associate with van Gogh. I thought back to my Sunday afternoons in the house of Sophie Devine: her artist’s appreciation of homely things, not least the large and weathered kitchen table that she used to scrub with Vim and that I placed, unchanged, at the heart of the action.

Van Gogh turned out to be the most remarkable man I’d ever studied. I read his marvellous letters to his brother. I discovered his omnivorous reading – all Shakespeare, all Dickens, all George Eliot and Mrs Gaskell – his soaring ambition and his reckless commitment to his art. I learned how the radicalism of nineteenth-century London illuminated his thinking and his work, and I discovered the manic depression that would torment him throughout his life. 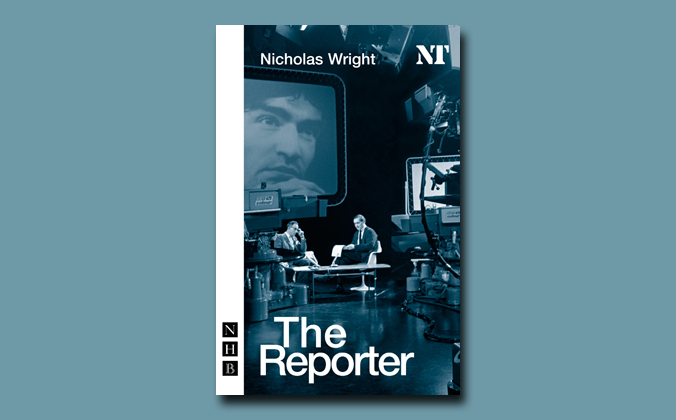 The cover to the playscript of The Reporter, published by Nick Hern Books alongside its premiere at the National Theatre, London, in 2007

Depression is a theme in all five of these plays. The Reporter is the story of a man who ended his life because of it. The insidious thing about this illness is that it disguises itself as a perfectly sane appraisal of an unbearable world, rather than the distorted view that it really is. Thus, while Mossman, as I’ve written him, knows that something is badly wrong, he doesn’t know what it is and we, the audience, discover the truth only obliquely.

The play is set in and around the BBC of the 1960s, where I worked as a floor assistant, i.e. glorified callboy. I was present in the early scene of the play where the irascible interviewer Robin Day takes over at short notice from the ailing Richard Dimbleby. I knew Mossman very slightly from his august and elegant backstage presence in discussion programmes. Louis I knew better: I’d met him when I was twenty-one, when his brilliant mind and his charisma bowled me over. 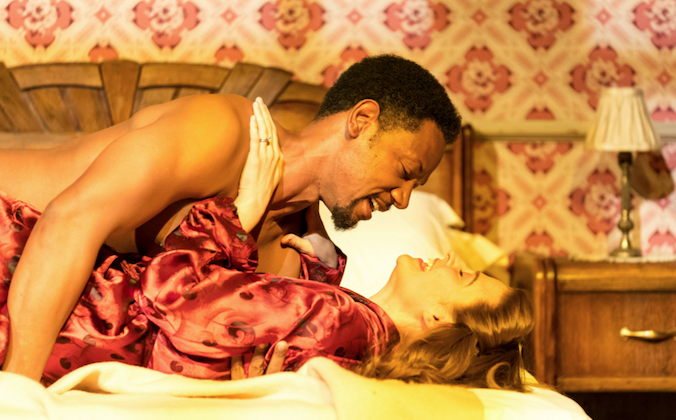 Finally, 8 Hotels. When Mrs Klein was produced in New York, the title role was played by the great American actress Uta Hagen. Once it had finished its off-Broadway run, the production set off on a national tour and it was at the opening date, San Francisco, that I had the idea for the play.

Uta, the director William Carden and I were having dinner after the show in a once-grand but somewhat down-at-heel hotel. It was Uta who had chosen the place, and I wondered why. Then I noticed her mood of elation. ‘Oh, I am so happy!’ she rasped, and I understood. During World War II, she and her lover – the singer and activist Paul Robeson – had toured the country in Othello, with her husband José Ferrer as Iago. One of their dates was San Francisco, and this hotel was surely where all three of them had stayed. Had Robeson been allowed through the front door, I wondered? Or, like other people of colour, was he sent round to the goods entrance?

Both he and Uta were larger-than-life figures, hugely talented and politically aware. The difference is that, for Robeson, acting and singing were necessary tools in his political work: they gave him profile, they got him heard, they enabled him to get his message across to the world. His art was useful but subordinate. For Uta, it was the whole purpose of her life. 8 Hotels is about these two contrasting paths, with rewards and penalties lying in wait whichever one chooses.

‘I’ve been luckier than I deserve’ 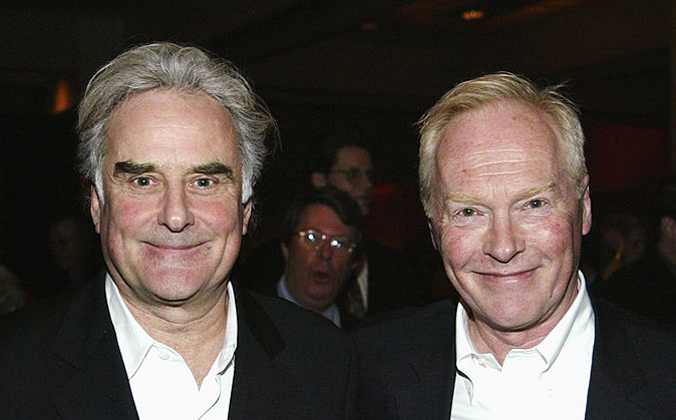 A few sources: I couldn’t have written Mrs Klein without the help of Phyllis Grosskurth’s classic biography. Martin Bailey’s book Van Gogh in England was indispensable, Stephen Orgel’s Impersonations opened my eyes to the ambiguities of Jacobean theatrical cross-dressing, and I’m grateful to Professor Martin Dubermann for access to his unpublished interviews with Uta Hagen.

Anyone who has a play produced knows how much is owed to everyone else who touches it. These five plays were directed by three superb directors (Richard Eyre, Peter Gill and Nicholas Hytner) and I’m grateful to them all, as I am to the actors and designers I’ve been lucky enough to work with. Looking back over a long-ish life, I feel that I’ve been luckier than I deserve.

Nick Hern Books is proud to publish Nicholas Wright’s plays – you can browse his work, available to purchase at a 20% discount, here.