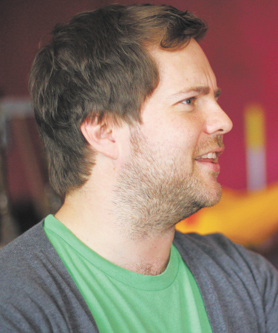 After being inspired by a TED Talk about the workings of the teenage brain, Ned Glasier (Artistic Director of Company Three, previously Islington Community Theatre) and co-writer Emily Lim realised they had the germ of an idea for a play that could be shaped and performed by teenagers themselves. Here, Ned Glasier charts the development process, and explains how the resulting play, Brainstorm, has been designed to be adapted and performed by other youth drama groups. Below, neuroscientist Professor Sarah-Jayne Blakemore, who contributed to the play’s development, reports on the scientific angle.

Ned Glasier, Artistic Director of Company Three: Like so many devised plays, Brainstorm started out as a totally different idea.

In 2012, Emily Lim and I began work on a project exploring the coming of age of a fictional boy in the Egyptian revolution. When this didn’t quite work out, we realised that what we were both really interested in was the moment when people become ‘themselves’.  That led us to an inspiring TED Talk by cognitive neuroscientist Dr Sarah-Jayne Blakemore, about the workings of the teenage brain.

As with all Company Three work, what followed was an in-depth and long-term process, working with more than fifty young people through a series of projects, scratch plays, development processes and residencies.

During our early explorations of the subject, one of our young cast members was having an incredibly difficult relationship with her mum. After an early scratch performance, she told us that her mum had come to see the show, and had immediately gone home and called a family meeting to discuss it.  That was perhaps the first time we knew just how important it was to share what we’d learnt.

So we continued to develop the play. We went on residentials, played hide-and-seek, made limbic system dances and created art installations explaining the pre-frontal cortex. We wrote thousands of lists, recorded hundreds of conversations and spoke for hours with Sarah-Jayne and her then PhD student Dr Kate Mills.

Eventually we were lucky enough to take the play to the Park Theatre, the National Theatre and the BBC.

We discovered that not only had we made a play that helped others understand the teenage brain, but we had developed as a company too.  All our work making theatre with young people has been informed and improved by a better understanding of why teenagers are the way they are. 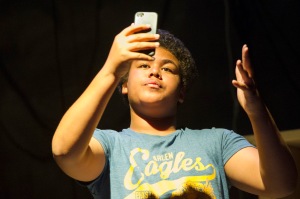 Company Three’s work is based on a principle of sharing, and we are so happy to be able to share Brainstorm with schools and other young companies. We know from the parents, teachers and other adults who came to see the show how important it is that adults understand what’s going on in the changing teenage brain. And how empowering it can be for teenagers to be the ones to tell them.

The recently published playtext of Brainstorm is both a record of the show, and a blueprint for making your own production. It’s an invitation to take our work and make it your own – to play with it, adapt it and develop it in new and extraordinary ways.

Above all, it’s an invitation to do what the teenage brain does naturally – to respond, to question, to adapt and to experiment.

We can’t wait to hear what you do with it. Do tell us how you get on. There are lots of ways to get in touch, including Twitter, Instagram or Facebook. 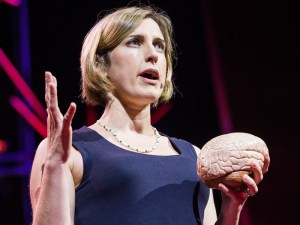 Sarah-Jayne Blakemore, Professor of Cognitive Neuroscience, UCL Institute of Cognitive Neuroscience: In 2013, I saw a scratch performance of Brainstorm given by twenty-five teenage members of Company Three (then Islington Community Theatre). The group, together with directors Ned Glasier and Emily Lim, had seen my TED Talk on the teenage brain and been inspired to create a play about what was happening inside their heads. Ned and Emily approached me and my former PhD student, Dr Kate Mills, to talk to them about the science of the adolescent brain.

When I went to see the scratch performance, I had no idea what to expect, but from the first scene onwards I was mesmerised by the imaginative interpretation of the science and the brilliant performances by the talented young people. The play was innovative and clever, and incredibly poignant, telling the stories of the complex relationships between the young people and their parents, set within the context of the science of how the adolescent brain develops.

I wanted to get more involved and was delighted that a grant from the Wellcome Trust enabled Kate and me to spend more time with the directors and young people to develop the play. Our first step on this journey was a twenty-minute performance and talk by the young people and myself in front of four thousand people at the Discovering the Future of Medicine event at the Royal Albert Hall in London.

It is important that we find new ways to communicate our scientific discoveries to young people and the general public, and Brainstorm is a perfect example of this. The impact of the play on its audiences at the Royal Albert Hall, Park Theatre, National Theatre and on BBC iPlayer has been profound and long-lasting. The cast have told Kate and me stories of parents rethinking how they understand and interact with their children as a consequence of learning about brain development from the play. We have heard about headteachers who have seen the play and returned to their schools determined to do things differently.

And we have learned from the experience too. It’s fascinating and important to learn about how the science of the adolescent brain is interpreted by young people themselves. We learn about their experiences, what’s important to them and what they care about, and this gives us ideas for our next experiments.

It has always been important to me that science is accessible and that everyone has a role to play in communicating it, questioning it and sharing it. I hope the published version enables many other young people to have the same experience of self-discovery that the cast of Company Three’s Brainstorm did, and that many more audience members might start to understand the extraordinary potential of the teenage brain.

This edition contains a series of exercises, resources and activities to help schools, youth-theatre groups and young companies create and perform their own Brainstorm. It also features the complete script of the original production which played at Park Theatre and the National Theatre, London, in 2015.

Related Blog Post: ‘The whole process of putting on Brainstorm was transformative in a way I’ve never experienced before.’ An intrepid English teacher reports on the experience of staging Brainstorm with his students. Read more >>