The Edinburgh Fringe is over for another year, but how did our intrepid amateur companies get on performing plays licensed by Nick Hern Books? We hear from four of them as they recount the highs – and the lows – of mounting a production on the Fringe. (If you missed the first instalment, it’s available here).

Our Edinburgh experience was incredible!  That’s the only way to describe being a part of this amazing festival.

We performed at the Space Triplex Big and each day we got a good number of audience members. The response was very positive with several people describing the show as the best one they had seen at the Fringe.  We had a great reaction from Glenn Chandler, the original creator of Taggart, who tweeted  ‘MUST SEE is Burying Your Brother in the Pavement. Grief, love + gayness all handled by 13 year olds. Astonishing. 5★’

Taking young actors to the Fringe was a complete delight and the company worked extraordinarily hard to make the show something special.  As each performance went by, the actors became stronger and it is a credit to Jack Thorne’s writing that they so easily fell into the story, tackling sensitive and emotional ideas with honesty and confidence.

Promoting the show on the Royal Mile is always rather a bun fight but we worked out that a tableau of actors all gathered around a body lying on the street was good for getting attention.  We even had a policeman take a picture of the scene on his phone!

We saw loads of shows and enjoyed the variety of performances on offer.

Being able to take a show that was new to many and one that pushed all of the actors was a very fulfilling experience. Exposing young actors to tough drama requires maturity and talent and I am happy to say our company had this in spoonfuls.

We’re already planning for the Fringe in 2017!

After making a full recovery from the craziness that is the Edinburgh Fringe, it’s safe to say that we couldn’t be more delighted with our fringe experience!

Over 500 people came to see Holes during its seven-day run at C Venues. We even secured three sold-out performances with large standing ovations which left us grinning from ear to ear. To see such vast and thrilled audiences was a definite highlight for us, putting to rest our anxiety about the large auditorium – much bigger than our venue last year.

The cast of Holes by Tom Basden, performed by Lyons Productions

Tom Basden’s writing is a big draw, and flyering became an easy feat as soon as his name was mentioned. So we owe a lot to Basden’s talent and reputation – but we’d like to think that the enthusiasm we received from audiences indicates that we did his work justice. 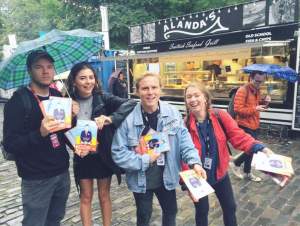 Flyering in the inevitable rain!

One challenge we had to overcome  was when we realised in our tech rehearsal that the piles of shredded newspaper we’d prepared for the set to represent sand (the play is set on a beach) was simply going to take too long to clear in a five-minute get-out. So the team had to get to work right away, ripping pages of newspaper into larger pieces by hand. And yes, it was as ridiculously laborious as it sounds!

Other glamorous fringe activities included flyering in the rain and lugging the set across the city. But hard work and the occasional hiccup is exactly what the fringe is all about – we wouldn’t change one bit of it!

With the Fringe coming to a close and the curtain falling for the last time, the team has had a chance to reflect on the brilliant experience that was performing Howie the Rookie at the festival. It has been some adventure.

Tom Taplin (cast member, the Howie Lee): ‘Performing Howie the Rookie at the Fringe this year has been the most ambitious theatrical project I’ve ever been involved with as an actor. The form of Mark O’Rowe’s play is so unique, and having 40 minutes worth of monologue to play with every night was simultaneously daunting and liberating. The way the script engages with the audience and breaks the fourth wall meant that each performance could be really fresh as it adapts to the way the audience react.

‘The Fringe really is an incredible experience. I was so proud to be part of a festival celebrating the arts in so many different forms on such a huge scale; there is nothing else like it. It provides so many opportunities for such a diverse range of people, and I think it’s something we, as a creative industry, should all be extremely thankful for.’ 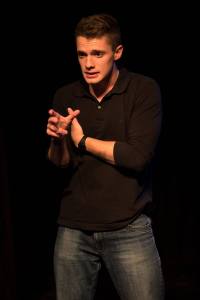 Ed Limb as the Rookie Lee

Ed Limb (cast member, the Rookie Lee): ‘The pace of life at the Edinburgh Fringe makes it hard to take stock. A week on, I’m still exhausted by the carousel of shows, fliers, crowds and drinks. Exhausted, but satisfied. I was thrilled the variety of performances, and the refreshing attitude to theatre as something spontaneous and inclusive.

‘With Howie the Rookie, I was initially frustrated by the difficulty of selling tickets in so busy a market, but quickly embraced the challenge, and focused on my own work. The script rewarded my efforts, proving consistently surprising and demanding as my character, the Rookie Lee, navigates a disturbing plot with wit and vulnerability. Ultimately, there are few places I’d rather be in August than at the Fringe.’

Rebecca Vaa (producer): ‘Being at the Fringe was an incredible experience unlike any other, and getting to be there with a show like Howie the Rookie was such a privilege. Not only is it great material to work with creatively, but being such a small team we were given the chance to get really close and to work very intimately together – which I really value from a personal point of view. There was a real sense of teamwork throughout the whole process, and even though flyering in the rain and performing to audiences of five people was tough, as a whole experience I think we each gained so much and learned a lot, while having the time of our lives.’

A play about finding a suitable punishment for an unspeakable crime isn’t the easiest sell on the Royal Mile, no matter how bright your artwork is. So it was great to have some really positive audience reviews to help get the word out about our production.

Still, there was an agonising wait for our first press review. When it finally came through, after two nail-biting weeks, it was well worth the wait: One4Review gave us five stars, ‘a fantastic and gripping hour of drama… Highly recommended!’

That got the ball rolling and others soon followed, including from Three Weeks (‘Dark, intense and personal, this play is utterly absorbing from the outset’) and Broadway Baby (‘The acting is excellent… they are able to navigate scenes of incredible emotional complexity and pain that many other actors would stumble over’). 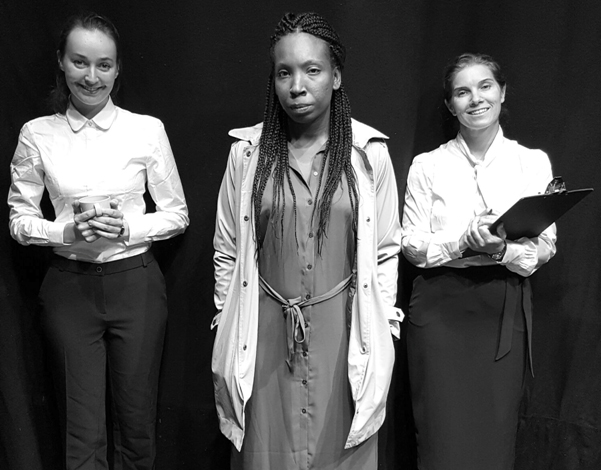 The Traverse Theatre invited us to attend the James Tait Black Awards Ceremony as hang had been shortlisted for the drama prize, awarded at the Traverse during the Fringe. We were extremely proud to represent the play at the ceremony, though in the event it lost out to Gary Owen’s play, Iphigenia in Splott.

Word about our production spread pretty quickly, and we were invited to appear in Mervyn Stutter’s Pick of the Fringe Show, a selection of the best shows at the Edinburgh Fringe.

Very much to our delight our production of hang won two Derek Awards (Best Drama and Best Individual Performance), the perfect way to wrap up our Fringe.

We loved taking hang to the Fringe and we have great hopes that the production will have a future life.

Looking for a show to take to Edinburgh next year? Take a look at our dedicated Plays to Perform site, where you can search for plays by genre, theme and/or cast size, and sign up for our Plays to Perform newsletter.

Or get in touch with our Performing Rights team – they’re always happy to help you find the perfect play to perform. Call us on 020 8749 4953, or email PerformingRights@nickhernbooks.co.uk.