This week saw the launch of the Nick Hern Books Collection on Drama Online, a groundbreaking new educational resource for reading and studying drama. Here, NHB’s Digital Editor Tim Digby-Bell explains how it works, and how it sheds new light on familiar plays.

Finally, it’s launch week. We’ve been working hard preparing a selection of our plays for Drama Online, the amazing new platform for anyone studying drama. For more than twelve months we’ve been planning, editing, revising, checking, drinking cups of strong coffee, fretting, and then doing some more editing. It’s all been worth it, though. It’s a thing of wonder, and it’s open for business.

Drama Online is a joint venture with other leading theatre publishers including Bloomsbury, Faber and Faber and L.A. Theatre Works, and incorporates archival material from the Victoria and Albert Museum and The American Shakespeare Center. As the name suggests, its focus is very much drama, and the place very much online. It’s essentially a subscription service aimed at schools, universities and libraries, giving instant online access to the best of world drama alongside a range of scholarly works for criticism and context. There is also a range of tools for exploring and analysing plays in new and extremely useful ways (more about those later).

Because it’s all online, students can access the plays they’re studying at any time of the day and night, without having to wait for a copy to become available. Think of it as a theatre-based Netflix. ‘Want to come round to my place for some Drama Online and chill?’ is now an actual thing. 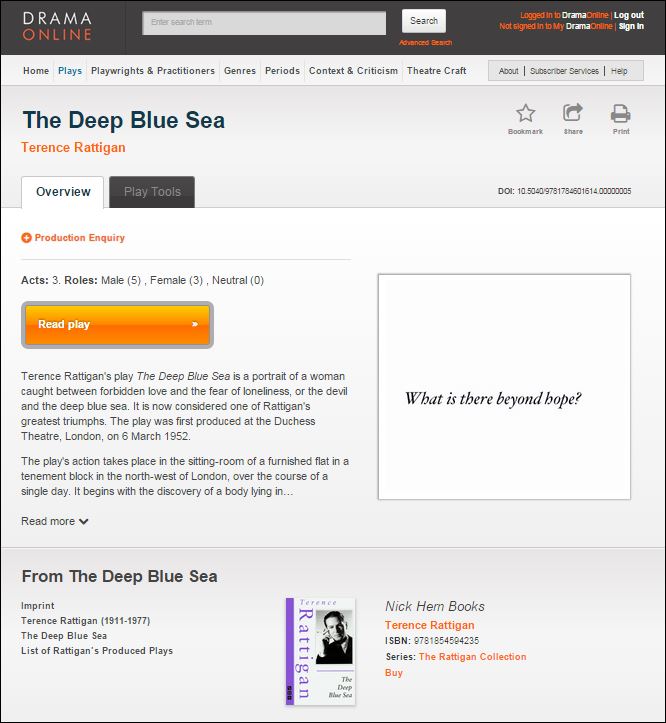 There are some 1,900 plays already available, with more being added all the time. You’ll find everything from Aeschylus to the present day, with a full range of classic drama, the complete Arden Shakespeare Series, modern classics and the latest work from contemporary playwrights. The Nick Hern Books Collection comprises 400 titles, including classic plays by writers such as Molière, Gogol, Strindberg and Alfred Jarry, the works of Terence Rattigan, modern classics by Caryl Churchill, Conor McPherson, David Edgar and Howard Brenton, and some of the most exciting new writing from the likes of debbie tucker green, Lucy Kirkwood, Jack Thorne, Steve Waters and Enda Walsh. With a Drama Online subscription, you have the whole pantheon of drama in English at your fingertips.

And, as if that’s not enough, you also get some really impressive tools to work with. At a keystroke you can call up Character Grids, Words and Speech graphs and Part Books for any play. For instance, if you want to compare the number of words spoken by different characters in a play, act by act, or even scene by scene, you can quickly and easily generate a table that lays it all out for you. If you’re performing a play, you can call up a Part Book showing just the lines spoken by your character. If you want to see plays set in London, or in nineteenth-century Paris, or written during the Belle Époque or the Spanish Golden Age, you can call up a list, and cross-refer to your heart’s content. 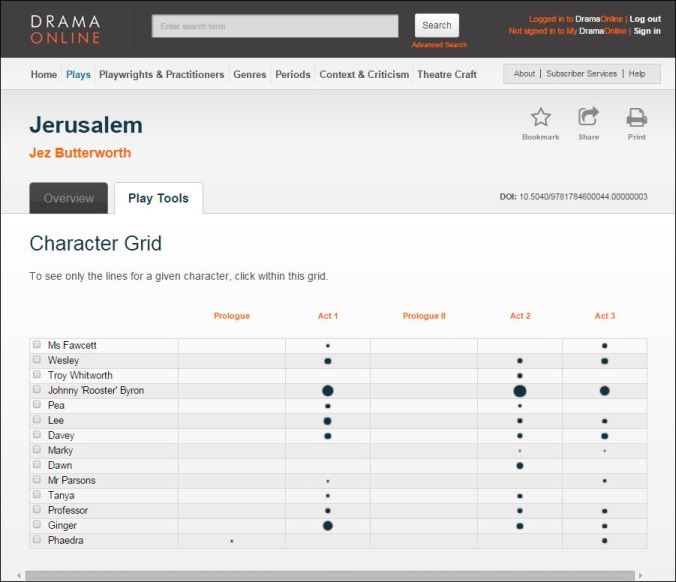 Character Grid for Jerusalem by Jez Butterworth, from the Nick Hern Books Collection 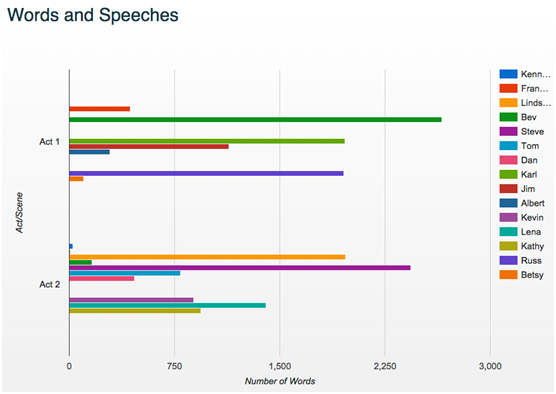 Words and Speeches table for Clybourne Park by Bruce Norris, from the Nick Hern Books Collection

The platform is designed to give you a simple but powerful set of tools to break down any play, making them easier to study. It might all sound a bit Orwellian at first, but start using it and you find it both incredibly useful and really quite addictive. The plays in the collections are all interconnected: every play is connected to other plays via their themes, characters, settings and genres, allowing faster analysis and deeper insights into the works themselves.

Beyond that, the site provides you with every bit of information you could possibly need about each title – including insightful introductions and expert analysis, production history, performing rights information to enquire about staging the plays, and even links to places where you can buy the good old-fashioned print editions (remember them?).

So if you’re studying plays at school, college, drama school or university, you absolutely must have Drama Online. Ask your librarian or resources manager to get a subscription immediately. If they say no, then stage a non-violent protest citing the fact that the first thing any totalitarian regime does when it comes to power is to ban access to the theatre. But do check if you already have a subscription before you do any of that – it could save you some embarrassment.

Having worked on preparing Drama Online for many months I can genuinely say that it’s an exciting new way to read and study plays. It’s the future, right here.

For more information about subscriptions, trials and pricing, visit: www.dramaonlinelibrary.com/pages/how-to-subscribe.