In addition to his success as a highly respected writer and teacher, Stephen Jeffreys also spent many years working on a guide to the craft of playwriting, to share his wisdom and experience. That book, Playwriting, is out now, published posthumously following Stephen’s sad and untimely death in September 2018.

Here, in an extract from Playwriting, he reflects on ‘learning things the hard way’, how writers should always be seeking to improve, and the opportunities of live performance.

As a teacher of writing, my starting point has always been that nothing that I can say or teach you will turn you into a playwright: you must have something that you want to say. You have to have the urge to say something onstage, and that is something I can’t give you. Most people have learned fascinating things from their life or lived through extraordinary experiences, had brilliant ideas or imagined great things. What I can try to do is to save you years of work by transmitting certain techniques, tools and tricks that can help you to translate your experiences or ideas into your play.

Aristotle’s assessment of playwriting in the Poetics remains to this day the greatest attempt to explain this mysterious craft. I have read many later books on playwriting, some going back to the nineteenth century, and most of them are not very helpful to the aspiring playwright. Either they tend to view plays in an overly academic manner or they tend to be too simple. What I think playwrights need is a practical guide to writing plays, including techniques, approaches, and story ideas, providing them with the tools that they can apply to their own work.

The first time I went to a playwriting workshop, I was running it, and so when I became Writer-in-Residence at Paines Plough, a new-writing theatre company, I sought to remedy this lack of teaching. I set up a group of playwrights called ‘The Wild Bunch’ whose intention was to teach each other everything we knew. We took it in turns to teach sessions, and we learned a great deal. I carried on learning about playwriting through working with writers over many years, including spending twelve years at the Royal Court Theatre in London, reading five plays a week, and running playwriting masterclasses. But more than anything else, I have learned about playwriting from working on my own plays. Writing plays is difficult. It’s rather different from writing poetry or novels or songs. It’s a very particular type of writing with its own set of skills. What I try to share are mostly things that I’ve learned myself the hard way.

Writers tend to fall into two groups. There are those who are terribly good at things like structure, organisation, getting the characters on- and offstage, and making sure that the plot is watertight; the tendency of writers like these is that they may be a little unimaginative and possibly lack that sense of poetry, metaphor, and the unexpected. Whereas the other type of writer tends to be brilliant at coming up with great visual images, understanding the psychology of the characters, or finding beautifully poetic moments or metaphors, but they seem incapable of getting the actors on and off the stage in the right order, or finding an overall shape for the play. I rather crudely refer to this as left-brained and right-brained writing: the left-brain being responsible for our organisational, rational and cognitive capabilities, and the right-brain being more poetic and spontaneous. There’s been some recent work on the theory that the left-brain and right-brain are fundamentally different, which of course concludes that it’s a bit more complicated than that, so I enter a disclaimer here that I’m using those terms in inverted commas. When I say ‘left-brain’ and ‘right-brain’, I don’t mean that I have any real grasp of neuroscience, but rather as a convenient way of labelling and thinking about these different types of approach to writing plays.

What I’d encourage writers to do is recognise and improve upon the part of playwriting that you’re not good at. While reading the last paragraph, you may already have instinctively identified with one of the approaches to playwriting; if so, that’s a good start! Because the key to playwriting, in contrast to other forms of writing, is that you do need to develop both these sets of skills. You can just about get away with being a novelist who doesn’t have a great grasp of structure, for instance, but it’s very hard to do that in theatre; conversely, a play that is beautifully organised but has no driving metaphor, no inner life, will be received by audiences as being very efficient but very dead. Another way of looking at it is to think of the difference between a ‘bird’s-eye view’ of playwriting, where you look down and see the whole map of a play spread out before you, and a ‘worm’s-eye view’ of playwriting, where you’re peering up from a muddy field, you have no idea what’s going on, but you are richly in the moment – which I imagine worms to be. Try to look into yourself, and to woo those skills that you feel you don’t have.

If you think about the way an audience receives a play, it’s very different from other art forms. If you are reading a novel, maybe you’ll read forty pages on the first day; the next day you have a domestic crisis so you won’t read anything; the day after that you may read a hundred pages; the day after that you read about five pages before falling asleep; and the next day you’ll get completely gripped and finish the book. Essentially, you choose when it all happens. Or imagine you’re in an art gallery, and you see a sculpture: you can generally choose how much time you spend looking at that sculpture – you can spend half an hour, you can spend ten seconds, but it’s your choice. In the theatre, however, as an audience member, if you’ve lost attention and dropped out at some point, then the show has gone on without you: there’s no rewind button; you can’t go back. A play happens live, in real time – that is the basic condition of writing for theatre – and as a playwright you have to learn to deal with that.

The 2016 revival of The Libertine by Stephen Jeffreys, starring Dominic Cooper as the Earl of Rochester (photo by Alastair Muir)

It’s always frightening when you see audiences tune out at the same time. If I have a play on at the Royal Court, during the first preview I will generally watch the play and take notes; but for the second preview, I will sit in one of the seats at the side of the stage in the gallery and watch the audience. I watch to see at which points they start, literally, to lose the plot. Audiences tend to switch off all together, and when they do that, it’s probably your fault as a writer: there’s something wrong with the play; this is the bit where it’s not interesting. A novelist can get away with writing a self-indulgent description of the countryside, say, because the reader can always think, ‘Oh yeah, I’ll just skip that bit.’ But you can’t do that when writing a play. If you lose the audience, even for a minute, it’s very hard to get them back, because they are holding on to a continuous piece of wire, they are following the story second by second. Our responsibility as playwrights is to make every single second interesting. This is our great problem, and also our great opportunity. 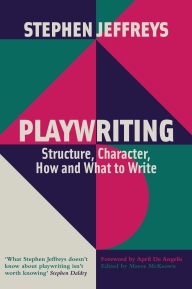 This is an edited extract from Playwriting: Structure, Character, How and What to Write by Stephen Jeffreys, out now and published by Nick Hern Books. Click here to buy your copy at a 20% discount.

Stephen Jeffreys was a playwright and teacher, whose plays include The Libertine. His Masterclasses – delivered at the Royal Court Theatre, London – attracted writers from all over the world and shaped the ideas of many of today’s leading playwrights and theatre-makers.