Whether you’re taking a show to the Fringe this year, planning on doing so in the future, or just going along for the ride, check out these four talented and intrepid amateur companies as they prepare to take on the Edinburgh Festival Fringe.

Each of them has chosen to perform a play licensed by Nick Hern Books. We asked them what lay behind their choice, and what they’re hoping to get out of The Fringe… 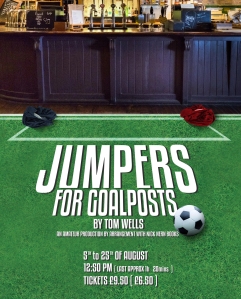 Jumpers for Goalposts by Tom Wells
Kite in the Storm Theatre
theSpace on the Mile, 5-25 August

Viv has a mission: to turn five-a-side LGBT football team, Barely Athletic, into league winners. They’ve started well with a victory over Tranny United (who were playing in stilettos), but with distractions like handsome librarians and a love of pot noodles, things look set to go downhill. Can they pull themselves together in time?

Kite in the Storm Theatre was created to offer an escape to those who need it. We may not be able to stop a nuclear bomb but we can stop you worrying about it for an hour or two. We chose Tom Wells’ play Jumpers for Goalposts for our first production at the Edinburgh Fringe as it’s perfect for the Fringe: it’s blissfully funny and at times deeply affecting. Our company brings together graduate students from Edinburgh Napier and Queen Margaret University, and we’re all so excited to experience the Fringe, and hopefully make a success of it.

We’ve worked exceptionally hard on this play and it’s been incredibly rewarding, both for our own development as actors and in the way we build our characters. We performed a preview show at our university on 25 April, and ever since we’ve been counting down the days to bring this to the Fringe. It’s an LGBT-interest play, and we’ve been getting a huge amount of support from the local community.

We’re now in our final weeks of rehearsals and pleased we finally get to put this fantastic play in front of an audience. At the same time, we’re feeling a little sad as we know it’ll all be over so quickly – we’ve grown so close to these characters in the months we’ve been working on the play, and it’ll be a wrench to leave them behind when it’s all over.

We hope to see as many people as the venue can hold, and we’re excited to meet other creatives and people who care about the theatre and arts.

‘They think I am the most beautiful thing in the world. And I don’t mind being a thing. I don’t want their respect. I want only their animal desire.’

Freak by Anna Jordan explores female sexuality, self-image and sexual exploitation in a comedic, relatable and sometimes shocking manner. We follow Leah, who is fifteen, and Georgie, who is thirty – two women at very different stages of their lives who are both trying to juggle their own sexual desires with the constantly contradicting pressures society places on them. Our production combines physical theatre and devised ensemble work with Anna Jordan’s powerful and provocative text.

Having already debuted the show in March, rehearsals are focusing on improving and tightening up movement, as well as delving deeper into character motivations. The ensemble cast acts as a visual projection of the protagonists’ inner thoughts and feelings, yet also symbolise all women, conveying the ongoing desires and struggles all women experience daily.

As the director, I have sought to make rehearsals an open, empowering environment where we can comfortably discuss the serious issues tackled in the play and collaboratively choreograph movement. Having worked on this show for many months now, it still never fails to shock us, and make us laugh and cry. We can’t wait for people to see it in Edinburgh!

How My Light Is Spent is a captivating two-hander exploring loneliness, vulnerability and longing in a world of phone sex-workers and drive-through doughnut restaurants.

The play centres on Jimmy, a 34-year-old employee at a doughnut restaurant, and Kitty, an adult chat-line operator, who Jimmy calls every Wednesday evening. Trying to come to terms with his recent redundancy, his estrangement from his daughter and also the fact he is becoming literally invisible, Jimmy turns to Kitty. Before long, a friendship blossoms between them, until Jimmy realises that he has fallen deeply in love with Kitty.

Whilst Kitty tries to advise Jimmy on his encroaching invisibility, she tackles similar feelings of being out-of-place, pinning her hopes of finding purpose on the psychology course she’s always dreamed of doing. Together, this unlikely duo succeed in turning each other’s world upside down and find in each other a sense of purpose and belonging.

We are a group of Cambridge students bringing Alan Harris’ play to Edinburgh for its Fringe debut, which we‘re really excited about, especially as this will be our first time performing there! Our company chose the play as it explores important contemporary issues, from the injustice of zero-hour contracts to the way in which sex work is viewed, in a thought-provoking yet light-hearted manner. It delves into the solitude and isolation of modern life in an engaging and comic way, making it a must-see for all. Participating in the Fringe gives us the chance to perform at a fantastic venue in front of large and varied audiences each day, which are really unique opportunities.

Aside from a few read-throughs in Cambridge, rehearsals for the play have just begun but our performance already seems promising. We’ve done quite a lot in terms of preparations, such as building our minimalist set and working on our publicity campaign, but of course there still remains a lot to do in these last two weeks before the festival.

We’re feeling really enthusiastic about the festival, if a little nervous, and can’t wait to begin our performances soon!

All eyes are on the city of Thebes. In defying the powerful Creon, Antigone takes civil disobedience to a very dark place. What is she? In the eyes of Creon, she’s a terrorist. Or is she a moral crusader? A loving sister? A freedom fighter? Or a death-driven woman who sacrifices all for a principle?

Amplify Time Productions is a collective of students and graduates from both Edinburgh Napier University and Queen Margaret University. Our focus is to produce classical plays in exciting and unique settings, highlighting issues in the modern day. We also strive to showcase upcoming Scottish talent.

We formed last year with our debut production Doctor Faustus by Christopher Marlowe. Following its success, this is our second performance as a company and our Edinburgh Fringe debut. We’ve also received the QMU Student Development Award for the second year in a row. 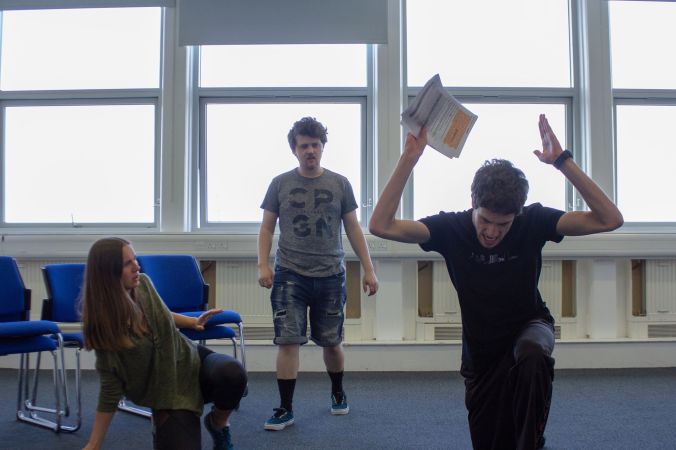 The rehearsal room has been an incredibly fun and exciting place for us all. We get to take on Owen McCafferty’s great contemporary adaptation of Sophocles’ iconic Greek tragedy, Antigone. Developing the unique characters of Creon, Antigone and Ismene, as well as exploring the identity of the chorus as a whole, has given us all great ideas and allowed us to develop the way we present our telling of this story.

It’s a very exciting time for us all as new, upcoming talent and we are really eager to get to the Fringe and have our very first experiences of it as a company.

Good luck and break a leg to all the brilliant amateur companies taking NHB-licensed shows to the Edinburgh Fringe this year!

Are you looking for a show to take to the Fringe next year? Take a look at our dedicated Plays to Perform site, where you can search for plays by genre, theme and/or cast size, and sign up for our Plays to Perform newsletter.

Or get in touch with our Performing Rights team – we’re always happy to help you find the perfect play to perform. Call us on 020 8749 4953, or email PerformingRights@nickhernbooks.co.uk.