As a new collection of his plays is published alongside the UK premiere of his latest play Ballyturk at the National Theatre, the London-based Irish playwright reflects on new directions in his work…

When we moved from Cork to London – about ten years ago now – we rented a house off the Old Kent Road. My wife Jo got a job at the Independent newspaper and I acquisitioned a box bedroom to write some plays in. I didn’t know many people in London back then – and those I first got to know were working the cash registers in my local Tesco.

On the bus on the way into the city I would pass the roundabout on the Elephant and Castle. Inevitably the bus would stop in heavy traffic and I remember deciding I would write a play about that very spot and about that feeling of being trapped and churned by your environment.

The play – The Walworth Farce – formed itself as a high-octane farce, which was a real surprise as we have no history of that style of performance back in Ireland. I had that image of farce seeping out of the West End and tunnelling under the Thames and finding its way to a tower block – and into the unfortunate lives of these Irishmen who really should be building Britain.

The play quickly wrote in three weeks and as I was writing it I had already decided to write a companion piece called The New Electric Ballroom. Both plays I think of as very Irish – plays about a shared family story where a person visiting will somehow force the truth out of that uncertain history. The New Electric Ballroom was quieter – more elegiac – but again it became about the pressures of the environment on these isolated characters. 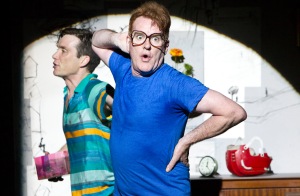 Mikel Murfi in Ballyturk (with Cillian Murphy behind). Photo by Patrick Redmond

Both plays kickstarted my collaboration with Mikel Murfi. I was a huge fan of his work as a director and actor when I saw him in Dublin. He signed up to direct The Walworth Farce for Druid in Ireland, came over to London where we sat in my attic drinking tea and performing the Farce to one another – our combined energy could have powered a small city. Mikel went on to perform as Patsy in The New Electric Ballroom – both plays toured around the world for a few years and their dark twisting of nostalgia seemed to strike a chord – particularly in America.

I’m always surprised how my British contemporaries often write plays directly about the world around them – like theatre is there to dramatise what we see in the news or talk about at dinner parties. It’s very peculiar and at its best it can be powerful and feel vital, I suppose. My one attempt to talk specifically about ‘something that was actually happening’ was in the play Penelope. 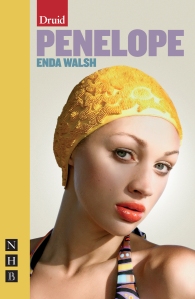 When the crash in 2008 decimated the fantasy that Ireland had created for itself, a German theatre in Oberhausen had already approached me and four other European playwrights to each take a section of the Odyssey to adapt. I was reading a lot about Irish bankers and financiers who were either killing themselves or being publicly vilified. I decided to write a play about Penelope’s suitors as they await their collective murder. It became part-situation-comedy, part-existential-scratching – scored by Herb Alpert. Not exactly social commentary then but it was what it was. Mikel directed the English-language premiere and the work I could tell was becoming more visual – a little more abstracted than before.

Two short plays followed – My Friend Duplicity and Room 303. Together – and I can only see it now – the themes of both plays had an effect on my most recent play, Ballyturk.

While the early plays – those in the first volume of my collected plays – were driven by language, I think – the new volume is concerned more with a play’s shape. The Walworth Farce locked the characters in a very mathematical form – shifting them about to the tight rhythms and rules of farce.

In Ballyturk, the play is guided by an outside force too. Like the characters, the play feels directionless and lost – thrown from one atmosphere to another. The question of what an audience takes home – what they experience – kept being asked. With Ballyturk we would tell a story – but more significantly we wanted an audience to experience form shifting radically.

Though I’m loath to define it for myself, the work in recent years is changing in other ways too. The process remains the same from when I was in my early twenties – I trust my instincts – the play will find its own shape, its own way.

The above is taken from the Foreword to Enda Walsh Plays: Two, out now from Nick Hern Books. The volume contains the plays The Walworth Farce, The New Electric Ballroom, Penelope, Ballyturk and two short plays, My Friend Duplicity and Room 303.

To buy your copy now at a 20% discount – no voucher code required – click here.

Enda Walsh discusses his new play Ballyturk in a National Theatre Platform tonight, Friday 19 September. This event will be followed by a booksigning. For more information, click here.