As the Middle East seemingly teeters once more on the precipice of war and the excitement of the Arab Spring gives way to a new, uncertain reality, playwright Steve Waters explains the process behind Ignorance/Jahiliyyah, his timely new drama for Hampstead Theatre which delves into the life and legacy of the influential author, thinker and Muslim Brotherhood member Sayyid Qutb.

Contemporary political reality can fill you with despair.  Israeli rockets slaughtering children in Gaza, the ongoing bloody impasse in Syria, the intractable agonies of the Eurozone, our own ignorant little coalition/junta dismantling the things that make life in this country tolerable – such a list, however glib, seems to give the lie to the idea that any form of politicised art can offer any insight or relief from the world’s dreadful in-tray.  Into such a world comes my new play Ignorance/Jahiliyyah, which just opened at Hampstead Theatre Downstairs.

The play concerns the experiences of Egyptian writer Sayyid Qutb (1906-1966) in America during the late 1940s and the ways in which his subsequent writings have shaped the tenor of relations between the West and radical Islamist politics.  Such a summary hints that you are not in for an easy night at the theatre, or the ‘laugh hit of two continents’, as Waiting for Godot was once described.  Some might also argue in a reality of political violence, in the form of war, torture and economic meltdown, a play of ideas, of debate, of words, is a somewhat depleted form of engagement.

Yet what drew me to this haunting tale of a stranger in a strange land was that it might offer a way to step back from the current end-game of political reality, the sickening predictability of regimes in bloody retrenchment.  Hamas, who are on the receiving end of so much Israeli ferocity, and of course who have dealt out mayhem of their own, have a long heritage, a history that can be traced to the very Muslim Brotherhood that Qutb was so influential towards in the 1960s; indeed even Bashar al Assad’s paranoid violence in Syria bears the ancestral traces of his father’s ferocious repression of the Brotherhood in Hama back in the early 1980s.  Violence may be the outcome, but ideas and words fuel and inform that violence.  When I started my play the Brotherhood were an outlawed and repressed force in Egyptian politics; now, in the form of the Freedom and Justice Party, they make up the dominant bloc.  A play that started out as an attempt to excavate the ideological roots of Terror has become about the pre-history of one of the key mobilising ideas of our time.

I don’t want to give the wrong impression.  At its worst, political theatre is often little more than an index of the passions that inform it; my job is to find and illuminate people, characters, to find a story that is not a mechanism for smuggling in messages but a moving entity in its own right.  In fact I bring little polemical intent to this play; rather I wanted to bear witness to the tragic encounter between the culture of Islam and the West (wherever that is).  Most of all I wanted to examine the pertinence of the challenge of radical Islam.  What were my credentials?  Other than some patchy travel in Israel/Palestine and Egypt, very little.  But I felt there was something in this I could imagine; and something I couldn’t let go of.

My first encounter with the historical figure of Qutb was in Paul Berman’s incendiary yet eloquent tract ‘Terror and Liberalism’, wherein the New York Times journalist, attempting to locate an intellectual heritage for al-Qaeda, turned to Qutb, painting him as a prophet of a fascist Islamic utopia.  For all the hyperbole of Berman’s account (a doomed attempt to justify the War on Terror from the left), he insightfully identified Qutb as a kind of Islamic Existentialist who offers an acute analysis of the alienation of modern life, which, in Berman’s words, ‘pulls us this way and that’.

So I looked closer at the now almost mythical details of Qutb’s time in the America of 1948-49;  time spent travelling, staying in New York and Washington, auditing courses in obscure universities such as that in Greeley, Colorado, where in part my play is set. When I looked closer, the truth of Berman’s observation became apparent.  Qutb’s visceral reaction against American life – the centrality of technology, the violence, the hollowness of its values, most of all the sexualisation – was a potent mixture of the sort of cultural critique that also came from European émigrés in the US of the time, be they Brecht, Adorno or even Evelyn Waugh, coupled with the insights of a post-colonial outsider.  Yet Qutb’s observations are also marked by a strange paranoia that seems hard to take at face value. Was he really visited by women in the night sent to recruit him?  Did New Yorkers really laugh and shout for joy in the street at the assassination of Hassan al Banna, the leader of the Muslim Brotherhood?  What was myth and what was truth?  This was an America bedevilled by McCarthyism and Jim Crow racism, and Qutb, in his suit and with his scholarly demeanour, was surely on the receiving end of that. But who was the woman he mentions at Greeley who brags of the ‘biological nature of sex’? What did he make of the Kinsey Reports into Human Sexuality? And what led him to publish an obscure allegory called ‘The World is an Undutiful Boy’ in the college journal?  Such questions seem impossible to answer beyond fiction.

This may all seem a long way from Gaza and the Arab Spring. Qutb’s animus against the West was not widely shared in the Muslim Brotherhood of the day; after all America was then deemed out of the colonial debacle.  And in no way do I attempt to suggest that what happened during that lost year was more fundamental in shaping Qutb’s ideas, as expressed in Milestones and other incendiary works, than what followed: ten years on and off in Nasser’s gaols, torture, and ultimately execution.  Yet those American experiences surely promoted Qutb’s notion that the way forward for the Islamic world was to extirpate any traces of western corruption, expressed in his blanket critique of the contemporary state of ‘jahiliyyah’, or ignorance of true Godly values, that he claimed prevailed everywhere in the world and which he suggested necessitated ‘jihad’ – a duty to struggle, possibly violently.  That dangerously accommodating word certainly went on to inform some of the frenzied violence in Algeria in the 1990s and then across the world thereafter.  But what do the man and his ideas mean now in a world poised between deep change and the fall-out of the disastrous response to 9/11? 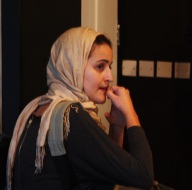 Hence the final element of the play – the encounter between Philip Mitchell, an English academic writing on Qutb, and his student Layla Ahmad, who accounts herself the guardian of the memory of a man who died decades before her birth. I wanted to examine the fall-out of Qutb’s ideas as they manifest themselves in the grassroots Islamisation of Egyptian society, a process that the January uprisings seemed only to have accelerated.  Visiting Cairo in 2010, the sense of a world on the brink of massive change, slipping into a non-violent but nevertheless pervasive form of Islamicised institutions, was unmistakeable and for me discomforting.  But what was it that was so unsettling – what was under threat?  What sort of appeal might these changes have for a moral, intelligent, passionate young woman?

It’s a commonplace now that the West’s repressions have conjured Islamism into life, and Egypt’s ex-Brotherhood leader President Morsi walks a delicate line between mobilising such forces (and the even more extreme forms they might take in Salafi groups) while at the same time keeping Egypt in dialogue with the West. Yet every time Israel humiliates Gaza, every time the West makes the wrong call in the fight for democracy in the region, that attempt to achieve dialogue becomes more endangered. I think in a modest way my play tries to weigh the risks and appeal of political Islam and audit why liberalism seems so tainted to those to whom we fondly imagine it appeals.

Ignorance/Jahiliyyah is currently premiering at Hampstead Theatre Downstairs, in association with the Peter Wolff Trust. For more information, and to book tickets, click here.