Helen Edmundson is a multi-award-winning playwright with a string of stellar hits to her name, including adapting Jamila Gavin’s novel Coram Boy for the National Theatre, and winning the John Whiting Award (Best New Play) for The Clearing. Her latest venture – bringing Arthur Ransome’s classic novel Swallows and Amazons to life for the stage – is a collaboration with songwriter Neil Hannon from The Divine Comedy and director Tom Morris (War Horse, Coram Boy). After a flying start at Bristol Old Vic and a critically acclaimed West End run, the ships have set sail once again touring the UK. Helen reveals how this ‘rich and appealing fantasy’ (Evening Standard) all began…

I’d really enjoyed working on Coram Boy, and I was keen to write something else aimed at a younger, family audience, so I was very pleased when director Tom Morris and songwriter Neil Hannon asked me to collaborate on ‘Swallows‘. Beyond being a really engaging adventure story for children, the book is about important things – about giving children freedom and time to play, about encouraging them in their imaginative games and allowing them to learn through them – and the characters are honestly and lovingly drawn. It is very much of its time – it’s set in the 1920s – but there is a charm and nostalgia which comes with that. And we all knew it could be funny. 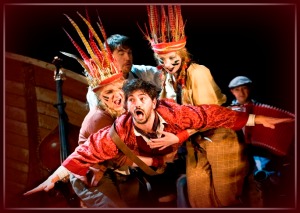 We developed the book and lyrics over a period of eighteen months – working at The National Theatre Studio. Neil lives in Dublin, so we would get together sporadically, often with marvellous actors to help us to try out our ideas, and then go off and work individually for a time. Tom Morris was with us all the way through, so the whole process was properly collaborative and organic. When Tom took over as Artistic Director at Bristol Old Vic, our show went with him, and became his first Christmas show at the theatre in 2010/11. Last year we continued to work on it, and in December The National Theatre and Fiery Angel, and The Children’s Touring Partnership brought the show into the West End. Now it sets sail on a nationwide tour.

One of the keys to the adaptation was realising that we could use the notion of imaginative play to unlock the story and its staging. We decided early on that we were not going to flood the stage and attempt to have real boats, but that we would allow the characters to create everything they needed, by grabbing whatever might be lying around in an old shed, or attic or garden. Imagination would be the answer to everything. And we would ask the audience to suspend their disbelief right from the start. So the great thing is that the script we now have can be tackled with very few resources. It’s an invitation to be inventive and could be realised in lots of different ways. The children in our production are played by adults, but they could be played equally well by children. The songs are reasonably simple and easy to pick up. I really hope it will be a tempting prospect for schools and amateur groups.

Tickling Trivia: Arthur Ransome, the author of the book “Swallows and Amazons” was married to Trotsky’s secretary.

Swallows and Amazons is currently touring the UK until 31st March 2012, click here to book tickets. NHB are proud to publish the playscript. To order your copy at the special price of £8 (normal price £9.99) with free UK P&P click here and add ‘Blog Offer’ in the comments field at checkout (to ensure your discount is applied when the order is processed).

Coming soon on the NHB blog! Helen talks about her next big project, The Heresy of Love, premiering at the RSC’s Swan Theatre, Stratford-upon-Avon, February 2012.