The Bruntwood Prize is the biggest national competition for playwriting. With prize money totalling £40,000, plus the chance of a production on a major stage, as well as publication by Nick Hern Books, it’s a fabulous opportunity for writers. Since its inception in 2005, over 11,000 scripts have been entered, more than £200,000 has been awarded to 22 prize-winning writers and 16 winning productions have been staged. Here publisher and NHB founder Nick Hern reflects on what makes the Bruntwood Prize so special, while below we introduce this year’s winners and catch up on the Bruntwood Story with Exeunt Magazine’s podcast… 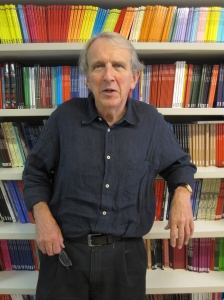 NICK HERN: Memory is an unreliable friend, but it tells me that the first thing I did ten years ago on hearing the announcement of the brand new Bruntwood Prize for Playwriting was to write suggesting that part of the prize might be to guarantee publication of the winning play by Nick Hern Books. I was very taken with the essential premise of the award: that no entry should have been performed or published before and that all entries were to be submitted anonymously, the identity of the winning author only to be revealed after the judges had arrived at their verdict. In other words the work was to be judged on its merits alone and not according to the expectations aroused by the author’s other work – or lack of it. This seemed to go a long way to fulfilling every writer’s desire to know whether what they’ve written is really, intrinsically, even existentially any good!

Pretend You Have Big Buildings by Ben Musgrave, winner of the 2005 Bruntwood Prize

Anyway, my offer to act as ‘publisher by appointment’ was accepted, and so I found myself at the ceremony awarding the first ever Bruntwood Prize to Ben Musgrave’s Pretend You Have Big Buildings. True to our word, we had the pleasure of publishing it when the Royal Exchange, also honouring their commitment to stage the winning play, premiered it on their main stage.

I’m not going to pretend to remember the chronology of subsequent winners, but together they amount to a seriously impressive collection of brand new plays, each of which might have remained in their author’s bottom drawer had it not been for the Bruntwood. Indeed, in at least one case, the play would not even have got as far as that drawer: it would probably never have been written. Vivienne Franzmann tells the story that, as a career schoolteacher, she had been saying for some time that she was going to ‘write a play’ – but never had. Then, hearing of the Bruntwood, and realising the deadline was only a couple of weeks away (alert: unreliable memory at work), she set to it. The result, Mogadishu, opened to loud acclaim in Manchester and proceeded to transfer to London, thereby launching Viv on a new career as a full-time writer. 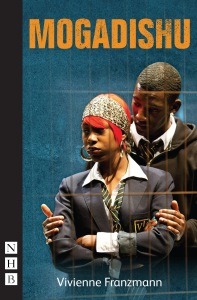 Mogadishu by Vivienne Franzmann, winner of the 2008 Bruntwood Prize

I am as proud of each of the playwrights we have published thanks to their winning the Bruntwood as if I had discovered them myself: as well as Musgrave and Franzmann, there’s been Matt Hartley, Fiona Peek, Andrew Sheridan, Janice Okoh, Nayla Ahmed, Louise Monaghan, Katherine Chandler, Anna Jordan, Gareth Farr and Luke Norris. In the same way, we ‘take on’ each of our writers in the fullest sense, publishing not only the winning play but also standing by to publish their subsequent work as well, as has been gratifyingly the case already with Janice Okoh (who won with Three Birds and went on to write Egusi Soup) and Anna Jordan (who won with Yen, but whose Freak and Chicken Shop have been published subsequently).

So Here We Are by Luke Norris, winner of a 2013 Judges Award

As the Bruntwood has grown in reputation and renown – and, it has to be said, in the generosity of the prize money on offer – my sense is that more established writers are submitting their work. In the early days we used to joke about a situation where Tom Stoppard, say, submitted a play – anonymously of course – and failed to win… Now, it seems, something like that really could happen, though, to the writer’s relief, only the administrator of the prize would ever know! Our latest winner, in fact, has already broken the mould in some respects: Luke Norris was already a performed and published playwright when he submitted – and won with – So Here We Are.

In its ten years, the Bruntwood Prize has already gifted a rich panoply of new plays to the world. So here’s to its next decade – and to ten more years of splendid if unreliable memories.

Congratulations to Katherine Soper on winning this year’s Bruntwood Prize with her play Wish List.

Katherine, who currently works in a perfumery on Regent Street in London, was announced as the winner of the 10th anniversary Bruntwood Prize for Playwriting 2015 on 17 November.

Wish List is Katherine’s first play. She said: ‘This is the best boost of writerly confidence I could imagine.’

Find out more about the Bruntwood Prize at www.writeaplay.co.uk.

In this episode of Exeunt Magazine’s podcast Pursued by a Bear, produced in association with Nick Hern Books, Tim Bano takes an in-depth look at the Bruntwood Prize, following the progress of scripts from submission to shortlisting by speaking to judges, readers and writers.

VIVIENNE FRANZMANN…was a Drama teacher in London for twelve years. She left teaching in 2009 to pursue writing after winning the 2008 Bruntwood Playwriting Competition for Mogadishu. The play also won the George Devine Award in 2010.

What did it mean to win the Bruntwood Prize? The first thing was that it was a total shock. I never expected to be one of the winners and, it was, and has been, brilliant. My ambition was to write a complete and finished play and be able to type the words ‘The end’. I would often start to write and then get sidetracked by real life/work/food – juggling a full-time career as a busy secondary school teacher with a passion for playwriting is no easy feat! So initially I was just pleased to have completed a whole play. When I was shortlisted in the competition, I allowed myself to imagine what it would be like to win, but never felt it was a real possibility, so I just enjoyed the fantasy of it all. My overwhelming memory of the ceremony was that in the rehearsed reading, the audience laughed at the stuff I thought was funny, which felt great. And then later when they announced my name as one of the winners, my dad, who’s Australian leant over and whispered, “You fucking beauty!”

And then all the hard work and lots of rewriting began…..

Winning has given me the chance to do things I never thought I’d do and be part of an industry that I didn’t think I’d ever be part of – I thought I’d teach for the rest of my life. The Bruntwood is an amazing competition because it’s open to everyone and everyone has an equal chance and the Manchester Royal Exchange is a fantastic place full of talented people who care about new writing and want to find new writers. Being one of the winners gave me the chance to develop my play alongside some great people and really develop my skill as a writer. The prize money gave me time and space to get the play to a place that I wanted it to get to and I enjoyed the whole process. So sometimes it was hard, but mostly it was just bloody great.

Since the award ceremony in 2008, I’ve been commissioned by Clean Break and the Royal Court. I’ve got an agent. I’ve poked my nose tentatively into the world of telly and I won another prize in 2010, the George Devine Award. And I bought a dog and called her Mabel (she’s a fucking beauty!). So, in essence, winning the Bruntwood opened doors to me and took my life in a completely different direction – and it made me a writer.

Mogadishu received its world premiere at the Royal Exchange Theatre in Manchester, January 2011: ‘the play has urgency and neatly balances rough-tongued adolescent rudeness with adult anxiety’ – Guardian. It will later transfer to the Lyric Hammersmith, London, opening on 3 March 2011.

Unprecedented, extraordinary, difficult, relentless, seemingly unending… however you choose to describe it, one thing’s for sure: thanks to the coronavirus pandemic, 2020 has been one hell of a year. For a theatre publisher like Nick Hern Books, nine months with a shuttered arts industry has been a challenge that’s forced us to adapt and find […]

In Nathaniel Hall’s hilarious and heartbreaking solo show First Time – a hit at Edinburgh Fringe 2019 and on its UK tour, and now available in print – the theatre-maker and activist draws on his own life story to smash through the stigma and shame of HIV, and present an uplifting and inspirational guide to staying […]