When actor John Hollingworth started writing his first full-length play, he had little idea it would take so long to reach the stage. No bad thing, though, when the result is Multitudes, currently at the Tricycle Theatre – and ‘as urgent and immediate as the morning headlines’ (Guardian). How did he do it? In this interview, first published by IdeasTap, he explains how plays can benefit from the development process without losing any of their impact or relevance…

How did the commissioning process work with Multitudes?

I’ve been lucky. The process started at the National Theatre Studio in 2010 when the ever-generous Purni Morell [then head of the NT Studio, now Artistic Director of the Unicorn Theatre] offered me some space. I fashioned a very early draft from this writing time, tried it out on some friends and was rewarded by Purni with a two-day workshop slot. I approached Indhu Rubasingham [theatre director, now Artistic Theatre of the Tricycle Theatre] to direct it, having worked with her as an actor on Women, Power and Politics [a season of short plays staged at the Tricycle in 2010].

The script turned out to be mortifyingly underwritten and she released the actors for the first afternoon while she and I talked through the structure and what wasn’t working. I went home, drank a silly amount of coffee and stayed up until I had two new opening scenes.

When Indhu later took over at the Tricycle she said she wanted to support the project. A seed commission – where a few hundred pounds is paid to a writer as gesture of professional interest – led to a full commission – where an amount you can live off for a few months is advanced – and then confirmation of full production. All in all I’d say that the process took four years.

Do you have any advice for writers on getting their first full-length play commissioned?

Get your writing out there. I was fortunate: some of my short plays were performed at Miniaturists at the Arcola, a shorts night at Soho Theatre and at a Midnight Matinee at The Tristan Bates Theatre. None of these experiences led directly to a commission but the experience of testing and improving work through rehearsal and performance improved my writing. I sent plays to the Bush and the Royal Court and received rejections that spurred me on to better my work.

Multitudes is a play about a clash of values in multicultural Britain, focussing on a Muslim family in Bradford. How did you research the play? 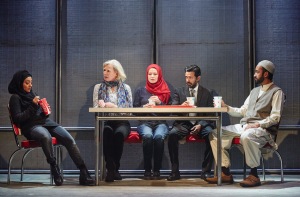 Multitudes at the Tricycle Theatre – photo by Mark Douet

I was working with David Hare when I started writing the play. I was inspired by his wrought verbatim method of taking things people have said and bending, hammering and bettering them into a sculpture that was definitively his.

I went back to Bradford, where I was at school, toting my dictaphone and door-stopped people. I had some interesting conversations but I was mostly just daunted and cold. Hunting down real things that people say was great ear-tuning for characters but I realised that I wanted to write a piece of fiction.

I began interviewing friends who are Muslim. The first person I sat down with was Asif Khan who has ended up being in the show. I got all my stupid questions out of the way and graduated from this to speaking to a couple of imams on increasingly-frequent trips back to Bradford.

I then went on to the tricky process of tracking down women who had accepted Islam. Perhaps unsurprisingly, this proved difficult. I met with two women in person and spoke with a third on the phone but many women were suspicious of my motives – what I might say about them and their personal, private decision.

Perhaps the best resource was Narratives of Conversion to Islam in Britain: Female Perspectives [a report published by the Centre of Islamic Studies at the University of Cambridge in May 2013]. It’s brilliantly readable and can be downloaded for free. That and other books – the Qur’an most obviously – helped me to further understand the journey these female converts had been on. This understanding was deepened further by spending a day with new Muslims at the Islamic Cultural Centre at London Central Mosque.

Were you ever worried about writing about a non-white family? 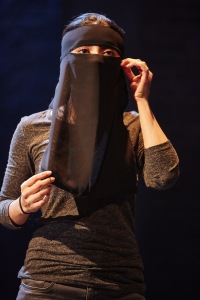 Multitudes at the Tricycle Theatre – photo by Mark Douet

I was anxious to begin with and I think that is entirely appropriate – if you’re putting words in people’s mouths then you have a duty of care that they are believable. The long development time on the play has allowed five workshops with different sets of actors – six including the cast – and each one provided a frank and invaluable forum to interrogate the play and identify what wasn’t credible or accurate. I’m grateful to the British Asian actors in those workshops – they corrected what was wrong and shared personal stories that went on to influence the play.

Multitudes is set on the eve of a Tory Party Conference. Why?

The conference gives high stakes and a short, defined timeframe, which is useful. My brother-in-law has been a political advisor to various Conservative MPs for the past few years and that has afforded me a valuable insight into that world. Given that the Tories are the Establishment party and the play looks at notions of Britishness, there was a natural fit there too and I wanted to make Natalie – the female convert at the heart of the play – the daughter of the local Tory party chairman.

What was the hardest scene in the play to write? Why? And how did you overcome those challenges?

Technically the hardest scene to write has been the one right before the interval. It’s long and involved and combative and riddled with interruption points and I feel spoilt to have a fantastically-capable cast who have reacted so enthusiastically to my changes. There were a lot of rewrites, late nights and cold coffee at midnight, but to see the play come to life in the hands of such a great bunch of actors has been a gift well worth losing sleep for. 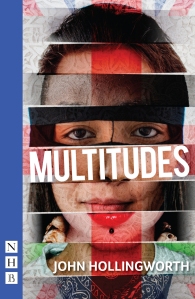 This interview was first published by IdeasTap.

Multitudes by John Hollingworth is out now from Nick Hern Books. To buy your copy at a 20% discount – no voucher code required – click here.

The play is at the Tricycle Theatre, London, until 21 March.

‘He doggedly pursued his unique vision’: a tribute to Robert Holman

Over the course of a career spanning almost fifty years, Robert Holman garnered a reputation as an extraordinary playwright, who influenced many of today’s most renowned dramatists. His plays, which have been staged at leading venues including the Royal Court, Chichester Festival Theatre, Bush Theatre, Royal Shakespeare Company, Traverse Theatre, Lyric Hammersmith, Donmar Warehouse and […]

Antony Sher, who sadly died this week, was one of the most respected actors of his generation. Most closely associated with the Royal Shakespeare Company – with whom he performed many of the most famous roles in the Shakespearean canon including Richard III, Macbeth, Lear, Prospero, Iago, Falstaff, Shylock, Malvolio and Leontes, as well as […]