The masked man of Theatreland has returned. West End Producer’s new book is the ultimate guide to theatregoing, full of the hilarious advice and insight he’s become known for. Here, WEP reveals the blood, sweat and Dom Pérignon that went into writing his must-have theatrical masterpiece, and why the perils of going to the theatre means it’s a vital addition to your library…

Back in 2013, the lovely people at Nick Hern Books published my definitive guide to acting – Everything You Always Wanted to Know About Acting (But Were Afraid to Ask, Dear) – filled with invaluable information about training, performing, bowing correctly, and how to get ahead in showbusiness. It was a marvellous success, which made me feel all warm and bubbly inside – the same feeling I get after a particularly tasty bottle of Dom.

But then came the inevitable question: what next? Having conquered the literary world, I knew I wanted to write another essential theatrical tome – but how to overcome the ‘difficult second book syndrome’, and avoid penning a Love Never Dies to my Phantom of the Opera?

For a long time, I’d wanted to write a book about how to get theatregoing just right (a Goldilocks guide to the West End, if you will). It would be a practical manual covering absolutely everything – how to see the hits and not the shits, how to avoid neck pain and deep vein thrombosis in the balcony, and how to save precious pennies on tickets, so you can afford the overpriced interval drinks and souvenir programmes instead.

After all, going to the theatre is a richly rewarding but potentially perilous activity that can take months of planning to get right. The consequences of being ill-prepared can make even the most confident theatregoer feel like a floppy theatre virgin. There are just so many things to consider: how do you choose what to see? How do you avoid getting lost and ending up at Buckingham Palace instead of the Palace Theatre? How do you find your way to your seat without treading on an unsuspecting OAP? What’s the correct level of applause if you only mildly enjoyed the show? These questions, and many more besides, finally needed answering. 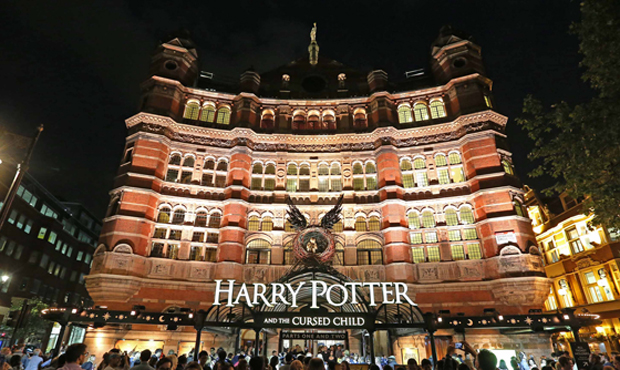 This is not Buckingham Palace, dear. (Photograph © Nigel Howard)

The result is my new book: Everything You Always Wanted to Know About Going to the Theatre (But Were Too Sloshed to Ask, Dear) – which, reading it back now, really is a bloody long title. It’s taken a full four years to get it finished, but this couldn’t be helped. It’s hard to find the time to write in between going to press nights, disciplining actors, producing shows, and cuddling up with my Miss Saigon blow-up doll.

I also found this book a little more challenging to write than my first book, as it required extra research. I had to brush up on my knowledge of theatrical terms (dozens of which are explained in the book). I also attempted to use lots of words that contained eight or more letters – for example: proscenium, cyclorama, and shinging (shit singing) – and learn the names of every single theatre in the West End and beyond. Which takes rather a long time, especially as they keep insisting on building more of the bloody things.

As well as the wide-ranging West End knowledge and advice outlined above, I also wanted to have a little look at some of the greatest shows to have ever hit Theatreland – so scattered throughout the book, like used show-pants in Soho, are potted histories of some our most legendary musicals, plus suggested future casting and details of songs that didn’t quite make the cut (such a shame audiences at Cats were denied the pleasures of ‘God, I Have Another Furball’).

Elaine Page as Grizabella in Cats – other rejected songs included ‘Anyone Got Some Tuna?’ and
‘If I Can’t Find the Litter Tray (I’m Going to Pee in the Stalls)’

It also contains some of my most deliciously naughty-but-true tweets  – because over sixty thousand Twitter followers can’t be wrong….

When reading my book you will learn how to become one of my Theatre Prefects: protecting theatres from phone-users, snorers, and persistent latecomers. With you, my dear readers, forming an army of Prefects parading around theatres up and down the country, we may together finally be able to ‘Make Theatre Great Again’!

Anyhow, I hope you enjoy my new book. It will entertain, enlighten and excite even the most novice theatre spectator – and put the spice back into the theatregoing relationship of the most jaded regular. It’s the perfect present for anyone in your life (Father Christmas himself said so, dear).

So sit back, get yourself into something comfy, and prepare to find out everything you always wanted to know about going to the theatre.

Everything You Always Wanted to Know About Going to the Theatre (But Were Too Sloshed to Ask, Dear) by West End Producer is out now, published by Nick Hern Books.

Buy your copy for just £8.79 (20% discount) from the Nick Hern Books website. All customers who purchase their book directly from NHB will also receive a free ‘Theatre Prefect’ badge.

One thought on “Everything You Always Wanted to Know About Everything That Went Into Writing My New Book (But Were Too Polite to Ask, Dear)”