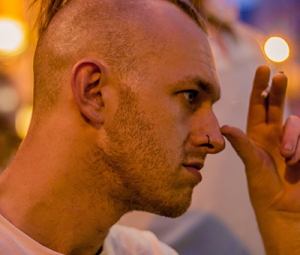 As a director, Jason Warren has staged immersive theatre productions in a variety of styles and settings – from relocating Shakespeare to a seedy nightclub, to turning school buildings into a quarantine facility for survivors of a widespread plague. Here, he shares his own passion for the form, his hopes for his new book Creating Worlds, aimed at those looking to make this type of work, and reflects on what the term ‘immersive theatre’ actually means…

Immersive theatre has been my obsession for a long, long time. My belief in its potential comes from my background. I didn’t grow up reciting Shakespeare, I didn’t go to theatre school straight after completing A levels and I certainly never had teenage aspirations of directing at the National. As an artist, my influences have often come from outside the theatrical canon. I believe theatre can make us feel how I did when I first listened to my favourite album as a teenager. I believe it can draw us in like the most choice-laden role-playing video game. I’m convinced it can rouse passions and make the audience express them like the fiercest political argument after too many beers.

If you ask five artists what immersive theatre is, you might get five different answers, but something that most people would agree on is that it’s a form that gives the audience greater access to the performance. Whether through roaming freely around the space or talking directly with the characters, these productions invite the audience to take a greater role, to be more involved, to become part of the artistry rather than just spectators. Despite that common purpose, however, if you’ve been to a few immersive theatre shows you’ll know that they often have very few similarities to each other.

I’ve been to interactive stories where I was locked in a room with twenty-five other people forced to make a moral decision that would change the story; controlled a small island as I struggled to remain independent against the superpowers trying to coerce me into giving up my uranium; been chased by shadowy creatures in the dark underneath London; and watched my mythological parents descend into a murderous feud. All of them were heralded as immersive productions, and none of them bore any resemblance to each other. There was no one type of space unifying the productions. In some the audience were confined to one room, in some they were free to roam. Sometimes we could affect the story, at others we were purely spectators. All of them, however, are immersive. 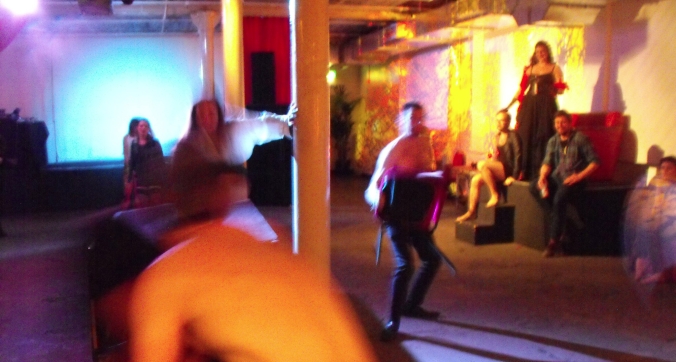 There are common threads I see in all productions that we call immersive. All are (or try to be) innovative in two areas: the role of the audience and how they use the theatre space. Within these threads there’s endless variations in both intention and success, but we can make certain general assumptions. It’s unlikely that the audience will be sat down in rows facing a stage. We probably don’t expect the audience to stay silent throughout then applaud at the end. The actors are not, in all likelihood, separated from the audience by an invisible ‘fourth wall’ at the edge of the stage. The problem is that we can point at endless examples of productions that are not immersive, and sometimes it seems like the form is defined by negatives; that by identifying everything that isn’t immersive, we can use what’s left behind as our definition.

I think this is unhelpful. To me, immersive theatre is about the certain spirit with which we make a performance. A production becomes immersive when it is made by a company who will experiment with the theatrical format in ways that are designed to drag the audience further in. So if you’re thinking about creating your own immersive work, let us agree to drop the debate about definitions and genres. Your production will be immersive, because you have decided it will be. All being well, it will be unlike any immersive theatre we’ve yet seen.

So yes: immersive theatre is a vast and diverse field, taking in work of many kinds. My new book Creating Worlds, however, is not a dry analysis of this form, nor a rundown of performances that have happened in the past. It’s written for theatre-makers, artists and students who want to create this kind of work. It’s also for those who are interested in the guts and ideas that fuel the performances they love. If it inspires you to create your own performances and is enjoyable to read, then I will have achieved my aim.

The joy of working in immersive theatre is that there is so much left to discover. Creating Worlds is the fruit of my experiments and projects over the last few years, but I’m also truly excited about the discoveries yet to be made. It’s a privilege to be working in a field that’s so uncharted, where every project is an opportunity to do something truly innovative. Through monumental mistakes and totally unexpected successes, I’ve ended up with a philosophy on what makes good immersive theatre. My aim with the book is to help you craft your own beliefs – and to create responsive and rich worlds of your own. 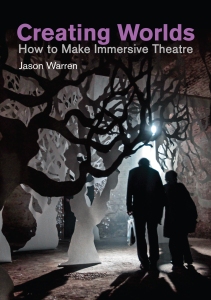 This is an edited extract from Creating Worlds: How to Make Immersive Theatre by Jason Warren, out now.

To buy your own copy for just £10 (rrp £12.99), use code WORLDSBLOG when ordering at http://www.nickhernbooks.co.uk/creatingworlds (offer valid until 31 December 2017).