When Kath Gotts and Maureen Chadwick started writing a musical about the pupils at an all-girls school rebelling against their tyrannical headmistress, they didn’t know it would take decades to reach the stage. But when it finally opened in 2015,  Crush was acclaimed as a hilarious blend of Malory Towers and St Trinian’s – a family-friendly hit with a touch of subversiveness. Here, as the script is published for others to perform, composer-lyricist Kath Gotts explains the appeal of schoolgirl fiction, and why it’s perfect for a musical…

Crush has a short title, but it took a long time – possibly a record-breakingly long time – to reach the stage.

The show was first conceived when I was not that long out of school uniform myself, when the tragi-comic emotional territory of first love and adolescent angst was sadly rather fresh in my memory. Maureen [Chadwick, who wrote the book for the musical] and I decided we wanted to write a musical together and with our shared delight in Fred and Ginger movies we had a mission to write our own version of a romantic comedy in classic book musical form. Inspired by our love of the British tradition of schoolgirl fiction – from Malory Towers to St Trinian’s, and the old Girl’s Own annuals – we thought it would be great fun to write a musical set in that world. In fact, we were amazed that nobody else had got there before us and that here was this whole rich genre as yet unpilfered by musical-theatre writers, with its own distinctive milieu and lingo, and the schoolgirl crush providing new love-story material for musical-comedy treatment.

We entered the very embryonic Crush (then called Sugar and Spice) for the 1989 Vivian Ellis Prize for New Musicals – three songs and a synopsis. We were thrilled to find we’d made it into the televised final. When asked to describe the show I cheerfully explained that it was a traditional romantic musical – just a simple case of ‘girl meets girl, girl loses girl, one girl finds a boy and the other one finds another girl’. We’d heard that Cameron Mackintosh was rooting for us, but on the big day itself he unfortunately wasn’t there in person and the rest of the panel seemed altogether perplexed by a love song from one schoolgirl to another – one suggested that he could imagine the show appealing to the ‘old men in macs’ brigade. Naturally, we didn’t win. 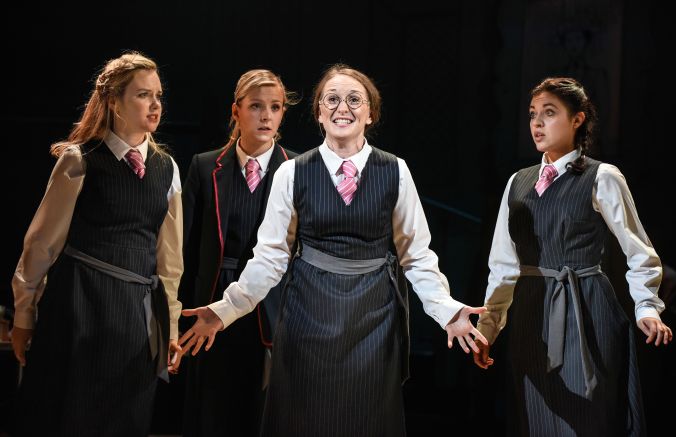 Crush isn’t so much a musical of its time as a musical that has had to wait its time. Back in the late eighties and nineties the very notion of celebrating a romance between schoolgirls was seen as radically subversive. Most of the cast of the 2015 premiere at the Belgrade Theatre in Coventry weren’t even born in 1988 when Section 28 came into force. Finally, however, the new Crush has emerged into a world where a light, frothy, show featuring a schoolgirl romance can be seen as what we always wanted it to be – a big-hearted show for all the family.

The love story in Crush is innocently played out – it represents a quest for self-expression and the claiming of one’s own true identity. Our story is set in a hitherto idealistic and liberal girls’ boarding school – Dame Dorothea Dosserdale School for Girls – which has recently been taken over by the tyrannical and repressive headmistress, Miss Bleacher (who has a couple of great belter numbers to help make her point). The first targets for her new moral crusade are two girls accused of ‘indecent and unnatural behaviour’ in the art room after hours, and the race is on to identify and expel them.

Like Elle Woods – the not-so-dumb blonde in Legally Blonde – or Tracy Turnblad – the not-so-slim girl with a beehive in Hairspray – our heroine Susan Smart is an outsider, a clever scholarship girl who loves another girl. Only it’s the wrong one. Susan has to navigate her way through her first lessons in love and learn to stand up for herself and her right to love whomever she chooses. And everyone else has to stand up and be counted too in order to save the school and everything it stands for. The girls are aided in this by the trusty Deputy Head, Miss Austin, and by a mysterious new games mistress, Miss Givings – who rallies their team spirit in the tap-dancing hockey number ‘Navy Knicks’. There’s also Benny the oddjob boy, who is not at all who he seems and is set to throw a romantic cat among the pigeons in Act Two when we run away to London…

The musical style has a nod to Irving Berlin and Julian Slade mixed with early sixties pop and some jazzy overtones. I like to think there’s a flavour of innocent sophistication to the songs! Steven Edis has done some wonderful arrangements for a band of seven players and it’s a thoroughly joyful musical – plenty of laughs, smiles and a few tears along the way.

Like our previous musical, Bad Girls The Musical [which premiered at West Yorkshire Playhouse in 2006, before transferring to the West End in 2007), Crush is written for a predominantly female cast. Both shows are set in all-female environments – Bad Girls is set in a women’s prison – where the action and stories are driven by the female characters. If you apply the Bechdel test to either of these shows – does it (1) feature at least two roles for women who (2) talk to each other about (3) something other than a man – they pass with flying colours! Professor Rosemary Auchmuty – who wrote a piece for the Crush programme, reproduced in the published playtext – has written extensively about how the all-female worlds of schoolgirl fiction have been so empowering to the young women who have devoured those books since they first started appearing as early as the eighteenth century. They showed that girls and women could be the protagonists in their own stories, and that whatever derring-do was required, they too could fulfil those roles.

The world of schoolgirl fiction is ripe for musical comedy, but it also has great heart and integrity. A lot of people assume that Daisy Pulls It Off was a musical – but it actually only included the school song.  Crush takes on some of that same flavour but is less of a direct parody. We always used to say that we wanted our artistic style to be ‘subversion by seduction’. In other words, make whatever you’re doing thoroughly entertaining and enjoyable and get your message across with a smile. Crush is an idealistic show – but it’s not simplistic. Like a good pint of Guinness, there are creamy bubbles on top but a deeply delicious pint underneath.

We were really thrilled when Nick Hern approached us about publishing Crush. Not only is it a wonderful culmination of its long journey to the stage, but more importantly it also represents the possibility of new beginnings for the show, with potential productions by amateur theatre companies, schools and youth groups. We know from our workshops and from our first production that Crush is a really fun show to perform, and we can’t wait for others to have a crack at it.

So ‘Put on your navy knicks, Pick up your hockey sticks’ and let’s all say ‘Bully Off’ for Crush!

Watch the trailer for the 2015 touring production of Crush:

Crush: The Musical, the complete book and lyrics by Maureen Chadwick and Kath Gotts, is out now, published by Nick Hern Books.

Formed in a rehearsal room at the Bristol Old Vic in 2011, The Wardrobe Ensemble are, in their own words, ‘a group of theatre artists working together to make new plays that dissect the twenty-first century experience’. In the near-decade since their founding, they’ve earned success and critical acclaim – performing around the UK, winning awards and […]