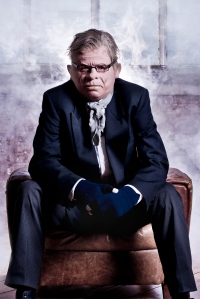 Ho ho ho, dears, ho ho ho. Taken from his book Everything You Always Wanted To Know About Acting, theatre impresario and Twitter phenomenon West End Producer gives you the lowdown on the festive theatrical staple that is pantomime, and tells you how to survive one…

Once a year a great theatrical tradition is practised in most theatres around the country. It is an event that has been passed down from father to child, from mother to milkman, from cross-dresser to giant. It is a marvellous, magical time when theatres actually make money. It is, of course, the Christmas pantomime.

Pantomimes are a hugely important event in a theatre’s diary. They are the show that sells far more than any other, and in many instances it is the success of the panto that allows the theatre to survive for the rest of the year.

Sadly, many people in the business look down on panto as an inferior form of theatre. It is not in the slightest. These people have just not seen a good one, or don’t really understand the joy of pantomime. Most people’s first venture into a theatre is to see a panto with their family at Christmas. Children have a wonderful time, and leave the theatre amazed by all the colours, effects and good honest fun – unless the panto has got Jim Davidson in it. In which case the child is put off theatre for life.

A panto is one of the hardest acting jobs it is possible to do. It will often involve more than twenty shows a week, living in the theatre, and cross-dressing on a daily basis. This can be a heavy burden on your voice, your physical stamina and your sex life. Many actors find that, after performing twenty shows a week, the last thing they want to do is an extra performance in bed. In fact, the best example of ‘suffering for your art’ is a pantomime at 10 a.m., dear.

Never trust a Buttons who is over the age of thirty-five. Many older actors who first played Buttons when they were eighteen are now still playing him at the age of sixty – which makes no sense whatsoever. It is very uncomfortable when the OAP Buttons tells the twenty-two-year-old Cinderella that he loves her. Unless, of course, the panto is being produced by the BBC – where this kind of thing is normal, dear.

When playing Snow White, never be fooled by your seven dwarfs. I have heard countless stories where the dwarfs convinced Snow White that she should sleep with them so they could all be truly close and comfortable. Never, ever do this. Unless you want to witness Grumpy feeling Happy.

Another ingredient of a successful panto are the ‘babes’. To be honest, I find the term ‘babes’ a little wrong, as the ‘babes’ are the young children who are brought in from the local dance school, and not the women who work in the local strip joint. I always feel uneasy calling these kids ‘babe’ and instead I call them the ‘little dears’. This term is useful, as it sounds both affectionate and condescending all at the same time. Whenever the ‘little dears’ are in or around the theatre they will be followed by some large ladies who have an abundance of facial hair. These are the kids’ chaperones. These ladies (and men) have the difficult task of keeping an eye on the children at all times and making sure no one goes within two metres of them. Naturally, it is very important that these children are protected and cared for in the theatre – particularly when there are men dressed as women, women dressed as men, and people called Dick. And because of this, the chaperone has to remind the children constantly that they are in a theatre – and it is not real life. They also have the important job of making sure that the adults keep their distance – and it is usual that in order to speak to the ‘little dears’ you have to send a letter, get it approved, be CRB-checked, sanitise your hands, go in front of the local council, and promise not to talk about burgers, chips or One Direction. 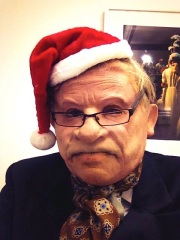 ‘Have a Merry Christmas, dear.’

A hugely important tradition at Christmas time is Secret Santa – where every member of the company buys a present for someone else anonymously. It is a lovely festive game that reveals what everyone thinks about their colleagues. There is usually a budget set of around £5 – although sometimes people spend a lot more or a lot less. People who spend less are the cheapskates of the company, and people who spend more are the show-offs. But, of course, if you are the lead in the show, you are legally obliged to spend at least three times the set amount.

The aim of Secret Santa is to offend as many people as possible. This can be done by buying inappropriate gifts, cheap gifts, or gifts that you were given the year before. I have seen many companies reduced to tears as a result of the Secret Santa gifts. It really is quite funny, and something which I always aim to witness. There are no real rules to it either – apart from making sure that everyone gets a present. There is nothing worse than a gift-less performer screaming and sobbing in the corner.

In approximately the second week of January most pantomimes finish – and many tired, withered, alcohol-sodden actors head back home. It is a sad time when frocks are hung up, greasepaint is packed away, and gurning is forgotten about for nine months. If you ever see one of these ex-panto actors wandering the streets, please do your bit and buy them a biscuit, a cake, or simply give them a smile. It’s not easy being an actor. And it’s even less easy being an unemployed actor in January.

Actors resign themselves to the fact that they won’t get any auditions during January – as this is the time when casting directors and directors sit at home watching DVD box sets whilst playing with themselves. And why not? We all need to do that once in a while.

When actors finish a show, it can be very hard returning to normal life. Particularly after you’ve been busting your gut for three months entertaining families across the country. Suddenly coming back to nothing can be very disheartening indeed, and is, in many respects, the hardest part of being an actor. I have seen it first hand, when ex-partners of mine took weeks to get over their post-show depression. And that is what it is – a form of depression, as you attempt to move on from the life you have been living.

I am always upset when I see unemployed friends of mine wandering aimlessly around London at the start of a new year. It saddens me deeply, so I do my bit and buy them a sausage roll. Actors love a bit of cheap meat in flaky pastry, dear. 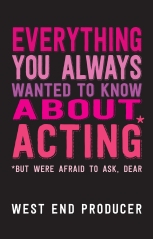 Everything You Always Wanted To Know About Acting – £10.99

The above is an edited extract from West End Producer’s hilarious book Everything You Always Wanted To Know About Acting (But Were Afraid To Ask, Dear). Packed with wit and marvellous indiscretion, full of gossip and insider knowledge, and with enough savvy advice to kickstart a career, it’s a practical – and sometimes deliciously impractical! – guide to everything you need to know about showbusiness.

To get your copy at a 20% discount – no voucher code required – click here.

Merry Christmas from all of us here at Nick Hern Books!