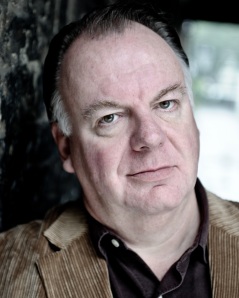 In addition to his appearances on stage, film and in popular TV shows such as Peep Show, Coronation Street and Him & Her, Paul Clayton is also a veteran of the corporate acting circuit, with over 1400 credits to his name. As his new book So You Want To Be A Corporate Actor?
is published, Paul explains what corporate acting actually is, the opportunities it offers and why it can be so useful for any actor looking to make ends meet.

To me acting has always been about surviving. Not winning the hundred metres sprint, but finishing the marathon. So that one can say, as in the words of the Sondheim anthem, ‘I’m still here’.

On my very first morning as a professional actor, in the readthrough of a Shakespeare production, a glamorous leading and much older actress came up to me during the tea break in the kitchen of the church hall where we were rehearsing. ‘You were lovely. Lovely, lovely reading. Do you know…’ she continued, ‘when you’re 40, you’ll never stop!’

‘Thank you,’ I muttered in bewildered gratitude. As I was 21 at the time, I was just slightly worried about what I was going to do in the intervening 19 years.

But the thing is – she was absolutely right. When I was 40, I grew into my age and began to establish some serious credits on television. Of course I did work in my 20s – lots of repertory theatre, stints at the RSC – but had no real sense of continuity. So much so that in my 30s I moved into what had always been my second love, which was directing. The jobs were great, but they weren’t too close together and there was plenty of time between them when I needed to do things to pay for the extensive range of baked potatoes that I was putting on the table. That’s how I became involved in what is known as ‘The Corporate Market’.

As you may have heard, this is where actors go and do very little work, for an enormous fee, while staying in a luxurious six-star hotel, having flown to an exotic location in business class at the very least, and pretend that the whole job is really rather beneath them.

There are still some corporate jobs that are like that – very few, but some. There are still some actors who think that corporates are beneath them – very few, but some. These days corporates pay more reasonable money, well on a par with an episode of a major television series, but not the sort of lottery bonanza that perhaps they were in the mid to late 1990s. They are an increasingly valid part of the employment market for all actors. These days, even agents have been known to return calls about corporate jobs!

So what is a corporate acting job and why would you want to do one as an actor? Surely what your drama school trained you for was to play Gorky at the National, or to don hessian and leather for 26 episodes of a historical swashbuckler on Sky. You may be lucky enough to have done one or both of those jobs, but probably between them, there was a gap. You can choose to serve behind the bar, or swipe barcodes in a supermarket, but many actors would prefer to keep their skills honed, and there are many jobs in the corporate market that allow you to do this.

Few and far between are the major corporations and public bodies that have not used role-play in their training. These days, there are large numbers of actors doing it, and many companies providing it, so the competition is fierce, and the role-play companies have their pick of actors wanting to do it.  Yes, role-play does involve all the skills you probably have as an actor, but it needs you to harness them in a particular way to be at your most effective.

When I sat down to write So You Want To Be A Corporate Actor?, my aim was to provide a practical and workmanlike guide to what is available for actors in the corporate market, and how they might best go about presenting themselves to get this sort of work and thrive in what is an increasingly competitive field.

For young actors leaving drama school these days, the opportunities for work in the long term are fewer and farther between. Reps produce fewer plays, and generally ones with smaller casts. In the early 1990s I directed several shows at a major London drama school, working with some very talented young performers. Out of the 40 or 50 or so young actors I worked with, I think five, or maybe even fewer, are still in the business. Falling in love, mortgages, changes in situation – all these pressurise actors without work into finding something that provides a regular income. In turn, of course, this means that the British talent pool is being depleted of that fabulous range of middle-aged actors who provide solid first-class support in television series, films, and theatrical productions around the world.

So it’s essential that actors diversify, and use their skills to gain themselves as much work as possible. It’s not possible for drama schools to teach young actors absolutely everything, but on the whole there is a great deal of ignorance about the corporate market from people entering the world of work. Many young actors leaving drama school, like myself, may not come into their own until their 30s or 40s, and yet in the meantime the bills still have to be paid. How much better for their development as an actor and an artist if they can use the skills they have learnt to provide that income.

The corporate market, imaginative and unpredictable as it can be, can provide that opportunity. Over the years I’ve come up through the floor of the Royal Albert Hall dressed as a Ghostbuster carrying a water pistol. I’ve stopped a train at a mountain-top station in the Swiss Alps to murder an actor in a disastrous knife-throwing act. I’ve watched speech-to-text computer programs produce a screen full of obscenities during a live demonstration and reduce an experienced television presenter to hysterics. I have worked opposite Chief Executives, nurses, doctors, lawyers, customer-help-desk personnel, and firemen (hmm…don’t know why I remember that last one!). Each job gave me an insight into another world – exceptionally valuable for an actor.

What I wanted to do with this book was to open up a world of opportunities to actors who may be struggling to find the sort of regular work that they need. Who should they write to? Who offers the work, what does it involve, and how do those companies choose actors? And, of course, what do they pay? Above all, it should help actors find opportunities that can be fun, challenging, regular, and paid!

I can’t promise you won’t end up dressed as a banana – you can always turn the job down if fruit isn’t in your repertoire – but I think I can assure you that you’ll find something in the corporate market that will excite you and that fits your skill set.

To find out how, why not read the book?

Nick Hern Books are delighted to publish So You Want To Be A Corporate Actor?, Paul Clayton’s witty, insightful and invaluable guide to the increasingly accessible and lucrative business of corporate acting.

To order your copy at a 25% discount – no voucher code required – click here.