The London via Lagos festival at Oval House Theatre in Kennington, running until 10 July, celebrates contemporary British Nigerian playwriting with two exciting new plays by Arinze Kene and Lydia Adetunji. Here, exclusively for the NHB blog, the authors tell us about what inspired them, and how they went about writing their plays.

I would describe Little Baby Jesus as an original narrative through the eyes of ‘young London’. It’s about three inner-city teenagers. It has three separate timelines, which all start to intertwine and come together as we discover our three main characters have a lot more in common than was originally apparent.

‘Identity’ was a big theme that kept coming up in the rehearsal room – ‘identity’ and ‘individuality’. All the characters in the play are struggling to find themselves. By the end of the play, they are very different people from when they started out on their journey.

For me, growing up was all a battle between who I was inside and who I thought I should be – in order to fit in. It went from the trainers I wore right down to the type of girls I was meant to fancy (In Little Baby Jesus, in Kehinde’s case, it’s mixed-race girls, or ‘mixed-race-girl syndrome’). I dumbed myself down a lot to fit in, and don’t believe I gave up the front until after my teens – luckily there was still enough ‘me’ left to salvage.

Here’s a line that came up in rehearsal on ‘not being yourself’: ‘you can front all you want but eventually you’ll crash and burn’.

So Little Baby Jesus looks at the inciting incidents which force our characters to grow up and not shy away from being themselves.

The idea for the play first originated as a poem in 2006, before I began writing plays. It’s inspired by a school trip, a pilgrimage that I went on when I was 14. We were on a long ‘religious walk’ (a compulsory outing at my Roman Catholic secondary school) and I and my two friends got lost. I always wanted to write about it and firstly it came out as a RAP (Rhythm And Poetry) – “lost on a pilgrimage, yet attaining the virtues of a pilgrim”. Then, in 2009, I was assisting with a workshop at the Young Vic, working with youths from pupil referral units, and the consistencies of the workshop disturbed the “quicksand part of my mind” and the idea came to the surface. Every evening after the workshop, I’d walk to the South Bank and write for about three hours, then get home and scribe for another two. It literally poured out of me. I had things I was meant to be doing but I was a slave to the idea. In the summer of 2010 I went to Paris for a week to finish writing the play (I ♥ Paris). I’d sit outside a café and spend 30 minutes people watching, then 10 minutes writing – repeating this all day for a week. In the evenings, I’d go out to a hip hop club, or have drinks with friends – just so’s I could detach myself from it and come back fresh the next day with a new look. I finished writing it in Paris, but it went through some more drafts after that.

Before I wrote plays I was into live music. I still am. Music is my first love and is an inspiration behind a lot of my ideas. There’s often something light playing in the background while I’m writing. I love listening to Terence Blanchard or Tania Maria when I’m writing dialogue. I feel like my writing is poetic and rhythmic because of this. I also listen to a lot of hip hop and love the wordplay. I read Langston Hughes poems over and over again. I’m also a fan of A. Van Jordan. I think this is what gives me my edge.

I would say that this is the first thing I’ve written that I really love through and through. It’s so inspired by things that I went through when I was growing up that certain parts make me feel uncomfortable and others will never stop making me laugh. I’m happy to share these ‘inside jokes’ and such. 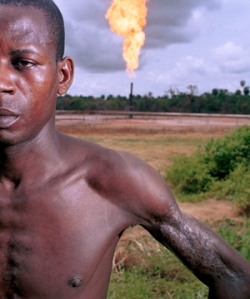 The central character in Fixer is Chuks, a Nigerian man who works as a go-between for foreign journalists who come to the country in search of a story. At the start of the play, a militant group has attacked a new oil pipeline, and Chuks becomes entangled in the competing demands of the militants and the reporters who are there to cover the story. It’s about Chuks’ personal dilemma, but takes in themes like corruption and how far people will go to compromise their principles.

Fixer started as a short play that won the Almeida Theatre’s WRITE competition in 2006, when it was not much more than a few scenes where a couple of journalists try to buy up a fixer. That evolved into something that brought together various interests – I’d spent time in Nigeria as a child and wanted to explore the struggles of everyday life there. And having worked in journalism I was interested in the role of fixers in getting news stories. An early version of Fixer played at the HighTide theatre festival in 2008, and since then the emphasis of the play has shifted more strongly onto Chuks and his dilemma.

My years working as a journalist have definitely shaped the way I work, which tends to be quite research intensive. But it has also influenced the themes I gravitate to – those points where cultures collide in an increasingly globalised world, and why systems work the way they do. I think many of the ideas in Fixer have significance beyond Nigeria – it explores how people are buffeted by interconnected forces far outside their control. But drama and characters come first, and I do want the audience to be entertained as well as stimulated.

Oval House Theatre, BEcreative and Spora Stories present London Via Lagos – a festival of new British-Nigerian plays, celebrating the work of African-heritage, UK-based, world-class playwrights. Little Baby Jesus is playing to 15 June, and Fixer from 21 June – 10 July at Oval House, south London. For 2-for-1 tickets to see Fixer between 24 – 30 June, use the promotional code JOURNALIST when booking online or by phone (Tel: 020 7582 7680) through the venue.

And for the chance to win a pair of tickets to see one of the plays, enter our May 2011 newsletter competition by clicking here!