If there’s one side of Ken Campbell that illustrates his insistence that theatre should be lived ‘in the moment’, it’s his penchant for the prank, his love of the hoax. The maverick director, who died two years ago aged just 66, was a sucker for stunts and wheezes of all kinds in his work, from the physical clowning in his early Ken Campbell Road Show, right through to the impossible feats and adventures in his great epics – Illuminatus! and The Warp – and his unstoppable flow of unlikely tall stories in his magnificent solo performances. He mixed vaudeville with science fiction, pratfalls with philosophy and physical fun with furious linguistics.  This is what made him so unusual: he emerged from the world of weekly rep and the first stirrings of the fringe as a provocative instigator of the unexpected, the outrageous and the downright disrespectful.  He really did believe that the only things worth doing were impossible, and that going to the theatre should entail taking your life in your hands.

He also felt that creating mayhem was all part of the serious artistic process. Thus the idea that the Royal Shakespeare Company should be put on hold in favour of a similarly dedicated Royal Dickens Company may sound ridiculous, or even far-fetched, but the whole madcap adventure had a serious undertone.

Many theatre directors, even RSC ones, have occasionally called for a moratorium on the Bard. One of them was Matthew Warchus, who directed the Alex Jennings Hamlet for the RSC and is currently responsible for their biggest non-Shakespearian hit since Nicholas Nickleby and Les Misérables, the Roald Dahl musical, Matilda.

Campbell’s RDC hoax, brilliantly conceived and inspirationally executed, was a response to the great success of David Edgar’s two-part version of Nicholas Nickleby in 1980, exactly one year after Ken had launched his ten-play, 22-hour epic The Warp on an unsuspecting public at the ICA Theatre in the Mall. 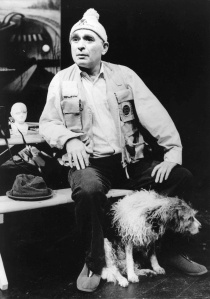 Ken with Werner, his dog, in Recollections of a Furtive Nudist (National Theatre, 1988)

But it was also a dig at the RSC’s increasingly commercial ambitions in the rush for sponsorship and world domination, and a reminder that some people were capable of ambitious, glorious work without any subsidy to speak of and outside the citadel of the establishment.

He despatched a series of letters on authentically reproduced notepaper, apparently signed by Trevor Nunn, then the RSC’s artistic director, inviting leading directors and playwrights to embark on a series of Dickensian adaptations: Bill Bryden was asked to consider The Pickwick Papers; Peter Hall required to ‘have a look at’ Martin Chuzzlewit; and Trevor Griffiths urged to re-visit A Tale of Two Cities with Jonathan Pryce in mind as Sydney Carton.

Mike Leigh was offered twenty-three actors and a 17-week rehearsal period ‘to take on the challenge of Bleak House: looking forward to your reactions. Love, Trev.’ Mrs Thatcher’s arts minister, Norman St John-Stevas, was also kept in the loop: ‘Dickens will prove as big a draw as Shakespeare, if we can keep up this terrific standard…Any thoughts you have on this will, as always, be treasured. Love, Trev. PS: Perhaps we could get together for lunch some time soon to discuss this. The Pickwick Club would seem appropriate!’

Stories appeared in the newspapers and Trevor Nunn had to confirm, rather wearily, that no more Dickens adaptations were planned. He even told The Times that a lot of people had written back to him refusing his offers or, more embarrassingly, accepting them. Eventually, Campbell’s cover was blown by Jeremy Paxman on Newsnight and he emerged from a silhouette to make a confession, claiming that he’d been inspired to perpetrate the hoax in order to focus even more public attention on the excellence of the RSC’s work.

There are two things theatre is particularly good at: telling stories and making mischief. And Ken was an arch exponent of both. The Ken Campbell Road Show was planned to be an advertisement for the lively new work at the Bolton Octagon, but Ken made his own offshoot enterprise in pubs and clubs far more interesting and enjoyable than the stuff they were actually putting on the Octagon stage itself. This subversive campaign was rooted in a philosophy, deeply and joyously antagonistic towards all manifestations of official culture or indeed political correctness, and it burns through his work from start to finish. 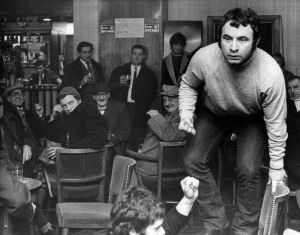 Pranks and wheezes were pursued not only for the sheer hell of it, but as a means of challenging the status quo and subverting the laws of propriety. It’s amazing how little theatre does this nowadays in any serious way, and Campbell was the past master. In Walking Like Geoffrey, the inhabitants of the Nottinghamshire village of Gotham pretend to be mad in order to avoid paying their taxes, while a member of the aristocracy tries to ‘pang’ himself into another universe. He approached the task literally, just as Bob Hoskins in the Road Show used to invite his partner to stretch a huge length of very strong knicker elastic across the heads of the audience before unwittingly releasing it full on into the innocent mush of his cooperating partner. Sylvester McCoy used not only to put ferrets down his trousers, but also bang nails up his nose and explode small bombs on his chest.

And throughout his career, Ken was daring his friends and colleagues to go further than is strictly allowable, in both art and life. His solo shows were a perfect amalgamation of heightened, creative reminiscence and speculative narrative propulsion, brilliant compilations of words and images that leave you breathless with excitement and helpless with laughter. And he liked nothing more than watching a daring improviser compose a sonnet forwards on the spot while counting backwards in sevens from five hundred.

It simply can’t be done: which is the only point in doing it.

Michael Coveney is chief critic and blogger for Whatsonstage.com. To purchase your copy of his new book – Ken Campbell: The Great Caper – hot off the press at the special price of £12.99 with free p&p (usual price £14.99, UK customers only), click here and quote ‘blog offer’ in the comments field at checkout. You can also send a direct message on Twitter to @nickhernbooks quoting ‘THE GREAT CAPER’ and we’ll get back to you speedily to process your order!

Also, to coincide with the book’s publication, Michael Coveney will be joined by special guests Richard Eyre, Jim Broadbent, John Sessions, Nina Conti and Daisy Campbell (Ken’s daughter), to talk about the maverick comic and his legacy, on Friday 8 April 2011 (5pm). Tickets cost £5 and can be purchased via the Royal Court’s website.

Ken Campbell: The Great Caper is the BBC Radio 4 Book of the Week for the week beginning 4 April 2011. For more information visit the BBC iPlayer website here.

One thought on “Ken Campbell: The True Spirit of a Prankster”