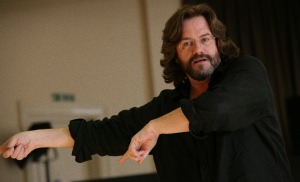 Gregory Doran has performed a masterful act of literary archaeology in bringing a lost Shakespeare play to the stage. Opening last night at the Swan Theatre in Stratford-upon-Avon, Cardenio is set in the heat and dust of Andalusia in seventeenth-century Spain. But the history of the play is every bit as thrilling as the play itself. Here, Greg charts the thrilling story of Cardenio, from the story’s first appearance in Cervantes’ Don Quixote to its re-imagining at the Royal Shakespeare Company in 2011, via Shakespeare and Fletcher’s stage in 1612 and the Theatre Royal Drury Lane in 1727.

Theatre is the most collaborative of the arts; and collaboration has been the key note of Cardenio since William Shakespeare and his younger colleague John Fletcher decided to write a play together, based on an episode in the Spanish best-seller, Don Quixote by Miguel de Cervantes Saavedra, first published in England in 1612, in a translation by Thomas Shelton.

Cardenio somehow avoided inclusion in either the First Folio of Shakespeare’s plays in 1623, or of Humphrey Moseley’s publication of Beaumont and Fletcher’s plays in 1647. But Moseley did register The History of Cardenio by Mr Fletcher. & Shakespeare (sic) for publication in 1653, in the Stationers’ Register. Perhaps Sir William Davenant (who promoted the rumour that he was Shakespeare’s illegitimate child) had a manuscript of this play, and may have prepared it for performance by his company after the Restoration, with Thomas Betterton, the leading tragedian of his time, as Cardenio himself. Davenant’s company had done adaptations of the two other Shakespeare/Fletcher collaborations we know about: The Two Noble Kinsmen and All is True (Henry VIII); so why not Cardenio?

The prompter to that company, one John Downes, retired in 1706, and it seems a manuscript copy of Cardenio, in his handwriting, fell into the hands of one Lewis Theobald. Theobald, who had trained in the law, had tried his hand at everything: classical translation, journalism, poetry, opera librettos and even a novel, and was scratching a living writing the new popular pantomimes at the theatre in Lincoln’s Inn Fields. But he finally came to prominence by challenging the great poet of the Augustan Age, Alexander Pope, for his sloppy inaccurate edition of Shakespeare. And Theobald’s follow-up move, designed to secure his place in the literary pantheon, was his adaptation of that Cardenio manuscript, which he called Double Falshood, or The Distrest Lovers. It was a success. It ran for ten consecutive performances at Drury Lane Theatre.

Back in 2003, when I was directing Fletcher’s The Tamer Tamed, his sequel to The Taming of the Shrew, we got a group of actors together to read Theobald’s Double Falshood. We all agreed that it had great potential, but that the plotting (particularly at the beginning) was convoluted, and it was missing several scenes. At which point, we put the play aside. However, after re-reading Shelton’s 1612 translation of Don Quixote, I realised that those missing scenes might be re-imagined from the very same source material that Shakespeare and Fletcher must have used. 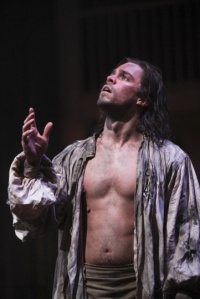 In 2007 on a visit to Spain with my production of The Canterbury Tales, I was introduced by the Almagro Festival director, Emilio Hernandez, to Antonio Álamo, a writer and the director of the Lope de Vega Theatre in Seville. Antonio is a Cervantes nut, so we inevitably discussed Cardenio. He alerted me to what an extraordinary story it is, and made me realise just how much Theobald (who admitted he was adapting it for the tastes and sensibilities of the London audience of his time) had removed: namely, much of the psychological complexity and rigour of the original. We would need to replace Cardenio’s ‘cojones’!

Further discussion with Spanish colleagues ensued. I travelled to Cordoba to accept a Bellas Artes medal, on behalf of the RSC, from the King of Spain (Laurence Boswell’s brilliant Spanish Golden Age Season had visited Madrid, as had my own production of Coriolanus: both had emanated from the RSC). In Alicante at a Cervantes/Shakespeare conference organised by Professor Jose Manuel Gonzalez de Sevilla, further discussions took place – and finally a visit to Seville with Antonio Álamo, to understand the significance of the story in Spain. Out of this visit came another draft, which we workshopped with the Hamlet company in 2008, and another draft was further developed at an RSC residency in Michigan, under the aegis of Professor Ralph Williams. Here we worked with Hispanic-American actors from the LAByrinth theatre company in New York. So, for example, Cardenio was played by a Mexican, and Don Bernardo by an actor from Los Angeles, which certainly revealed and rooted the play’s Spanish temperament.

Throughout the process, we poured over other seventeenth-century versions of the Cardenio story, by Pichou, by de Castro, by Bouscal, and by Thomas D’Urfey. But in an attempt to provide some sense of integrity to the piece, where extra lines were needed, I tried to limit myself to plundering only those Jacobean plays in which John Fletcher had drawn upon Cervantes.

Cardenio is the first new production in the Swan Theatre, since the RSC’s Transformation Project (another collaborative effort if ever there was one). The Swan opened twenty-five years ago with Fletcher and Shakespeare’s The Two Noble Kinsmen, so it is only fitting that we return with another play they worked on together, although this time the list of writing credits has grown to the length of a Hollywood blockbuster, with Shakespeare, Cervantes, Fletcher, Shelton, Theobald, etc.

Cardenio reopened the RSC’s Swan Theatre, Stratford-upon-Avon on April 27th, and runs to 6th October 2011. It has already received a glowing reception from the critics – ‘an extraordinary and theatrically powerful piece’ wrote the Guardian, ‘a spirited, entertaining and at times touching night at the theatre’ adds the Telegraph. Today’s piece is an extract from Gregory Doran’s Introduction to the published text of the play. To secure your own copy of the Bard’s ‘lost play’ – with a special 20% discount (and free p&p for UK customers), click here and add ‘Cardenio Blog Offer’ in the comments field at checkout and your discount will be applied when your order is processed.