To celebrate the new paperback edition of Richard Eyre’s Talking Theatre – his superlative account of how theatre is made, in the words of the very people who make it – we will be posting exclusive extracts from the book here on the NHB blog. Come back on Monday to find out what John Gielgud thought about working with Brando on Mankiewicz’s celebrated film of Julius Caesar. Then on Tuesday we’ll hear from Peter Brook about why theatre is so important to the English. Later in the week there will be posts from Fiona Shaw, Alan Bennett and Stephen Sondheim – all talking candidly about some of the most important productions and performances in the theatre of recent times. Here, as a prologue to next week’s special feature, Richard Eyre introduces the book, and explains why he thinks theatre remains essential and distinct from other forms of performance.

I started going to the theatre when I was eighteen, in the early sixties. The start of my theatregoing coincided with a period of extraordinary theatrical energy and invention. I saw the work of Joan Littlewood at Stratford East, the Royal Court in its most fertile years, the newly formed Royal Shakespeare Company under Peter Hall in Stratford, and the newly formed National Theatre under Laurence Olivier at the Old Vic; Oh! What a Lovely War and The Wars of the Roses; Scofield’s Lear and Olivier’s Othello; the young Maggie Smith, the young Albert Finney, the young Vanessa Redgrave, the young Judi Dench, the young Ian Holm, the young Ian McKellen, the even younger Michael Gambon; the older Richardson, Gielgud, Guinness, Ashcroft, even Edith Evans and Sybil Thorndike; the plays of Harold Pinter, John Osborne, Peter Shaffer, Arnold Wesker, Edward Bond, David Storey, Peter Nichols, Charles Wood and Tom Stoppard—with Kenneth Tynan presiding over it all as a mercurial judge and godfather.

What I liked about the theatre then and what I like about it now is its ‘theatreness’, the properties that make it distinct from any other medium—its use of time, of space, of light, of speech, of music, of movement, of storytelling. Theatre is intrinsically poetic, it thrives on metaphor—a room becomes a world and a group of characters becomes a whole society. It conscripts the imagination of the audience to transform the obvious unreality of costumed actors standing on a stage saying things they’ve said to each other many times into something that is both real and truthful. Theatre insists on the present tense—there’s a sense of occasion and of being part of a community in any theatre performance. We go into a theatre as individuals and we emerge as an audience. Above all, theatre can never dissolve its reliance on the scale of the human figure and the sound of the human voice. 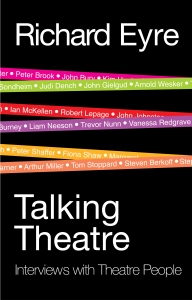 In 1997, shortly before I left the directorship of the National Theatre, I was asked by Andrea Miller (the producer) and Mark Thompson (then Controller of BBC 2) to write and present a six-part television series for the BBC and PBS on the history of twentieth-century British theatre. The series was christened Changing Stages and was broadcast as part of the BBC’s ‘Millennium Project’ in 2000. The programmes were composed of archive footage, pieces to camera, documentary film and, most importantly, interviews with people who had played a significant part in making and influencing the theatre of the previous half-century in Britain, with occasional glimpses across the Irish Sea and the Atlantic beyond. If there were omissions it wasn’t because there was a host of people who refused to be interviewed: almost all the people we asked agreed to talk to me on camera. The most notable refusal was from Marlon Brando, who sang down the phone from Los Angeles to the Glaswegian producer, Andrea Miller:

While he was enthusiastic to sing and discuss the work of Harry Lauder and the plight of the American Indian, he told her that he would rather do anything in the world than talk about acting.

A friend of mine once rashly invited Paul Scofield to give a lecture on acting. He wrote this in response:

I have found that an actor’s work has life and interest only in its execution. It seems to wither away in discussion, and become emptily theoretical and insubstantial. It has no rules (except perhaps audibility). With every play and every playwright the actor starts from scratch, as if he or she knows nothing and proceeds to learn afresh every time—growing with the relationships of the characters and the insights of the writer. When the play has finished its run he’s empty until the next time. And it’s the emptiness which is, I find, apparent in any discussion of theatre work.

Don’t miss reading exclusive extracts from five of the interviews published in the book, publishing everyday next week!

To order your copy of Talking Theatre at £9.99 with free UK P&P click here and add ‘Blog Offer’ in the comments field at checkout to ensure your discount is applied when the order is processed.

‘He doggedly pursued his unique vision’: a tribute to Robert Holman

Over the course of a career spanning almost fifty years, Robert Holman garnered a reputation as an extraordinary playwright, who influenced many of today’s most renowned dramatists. His plays, which have been staged at leading venues including the Royal Court, Chichester Festival Theatre, Bush Theatre, Royal Shakespeare Company, Traverse Theatre, Lyric Hammersmith, Donmar Warehouse and […]

Antony Sher, who sadly died this week, was one of the most respected actors of his generation. Most closely associated with the Royal Shakespeare Company – with whom he performed many of the most famous roles in the Shakespearean canon including Richard III, Macbeth, Lear, Prospero, Iago, Falstaff, Shylock, Malvolio and Leontes, as well as […]