This year, Nick Hern Books celebrated thirty years of theatre publishing. As the year draws to a close, we take a look at some of the things that have made it a year to remember…

We published 100 new plays over the year, two-thirds of them by female writers. 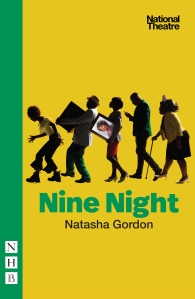 They included the exhilarating debut play from Natasha Gordon, Nine Night, which premiered at the National Theatre in April, went on to win the Evening Standard Most Promising Playwright Award, and is now in the West End.

Featuring alongside Nine Night on many critics’ review-of-the-year lists were Ella Hickson’s The Writer, which premiered at the Almeida Theatre in April, and Annie Baker’s spellbinding John, which had its UK premiere at the National Theatre in January.

Arinzé Kene followed up his acclaimed performance in Conor McPherson’s Girl from the North Country with a play of his own, Misty, performed by Kene at the Bush Theatre in March before transferring to the Trafalgar Studios in September.

There was Josh Azouz’s unsettling Buggy Baby at The Yard in March; Joe White’s ethereal family drama Mayfly at the Orange Tree in April, along with Chris Bush and Matt Winkworth’s headline-grabbing The Assassination of Katie Hopkins at Theatr Clwyd, winner of Best Musical Production at the UK Theatre Awards; Stephen Karam’s The Humans at Hampstead Theatre in August; Alexis Zegerman’s Holy Sh!t, opening the renovated Kiln Theatre in Kilburn in September; Nina Raine’s Stories at the National Theatre, debbie tucker green’s ear for eye at the Royal Court, and Iman Qureshi’s Papatango Prize-winning The Funeral Director at Southwark Playhouse, all in October; Jessie Cave’s Sunrise at Soho Theatre in November; and, in December, Mike Bartlett’s Snowflake at the Old Fire Station in Oxford, as well as Lynn Nottage’s Pulitzer Prize-winning Sweat at the Donmar Warehouse.

In January, we published a collection of plays from the annual VAULT Festival in Waterloo, as well as a selection of award-winning monologues from the inaugural Heretic Voices competition. In June, there was a volume of short plays by and about women, from the Women Centre Stage Festival. And in July, we published Vicky Featherstone’s selection of monologues, Snatches: Moments from 100 Years of Women’s Lives, as well as a collection of plays by Stephen Jeffreys, who very sadly passed away this year.

It was also a year of major revivals, with Tony Kushner and Jeanine Tesori’s superlative musical Caroline, or Change at Hampstead Theatre in March, and now in the West End; in May, Winsome Pinnock’s Leave Taking at the Bush, and Tracy Letts’ Killer Joe at the Trafalgar Studios with Orlando Bloom; Sophie Treadwell’s Machinal at the Almeida and Rona Munro’s Bold Girls at Keswick’s Theatre by the Lake, both in June; David Edgar’s Maydays revived by the RSC in September, alongside his new one-man show, Trying It On; and Martin Crimp’s Dealing with Clair at the Orange Tree in October, thirty years after it premiered there in 1988 – when it was the second play ever published by Nick Hern Books!

Many of our playwrights won awards this year, and we’ve got space here to mention only a few…

Branden Jacobs-Jenkins won Most Promising Playwright at the Critics Circle Awards for his plays Gloria and An Octoroon, while Andrew Thompson won Best Writer at The Stage Debut Awards for In Event of Moone Disaster.

There were awards aplenty for the revivals of Tony Kushner’s Angels in America and Stephen  Sondheim and James Goldman’s Follies.

And at the Writers Guild Awards, Lucy Kirkwood won Best Play for The Children, Sarah McDonald-Hughes won Best Play for Young Audiences with How To Be A Kid, and Caryl Churchill was recognised for her Outstanding Contribution to Writing. 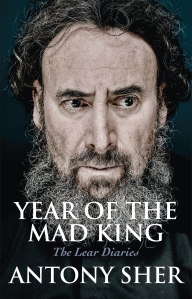 This year we published Antony Sher’s account, in his own diary entries, paintings and sketches, of his portrayal of King Lear for the RSC. Year of the Mad King follows his classic of theatre writing, Year of the King, in offering a close-up study of a great actor at work on one of Shakespeare’s most challenging roles ­– a fascinating read for actors and theatre-lovers.

Amongst our other publications, there were invaluable resources for actors, including a selection of audition monologues from the National Youth Theatre, and a series of vocal warm-ups on CD from the National Theatre’s Head of Voice.

We published books on Brecht and Ibsen, as well practical guides to puppetry, verbatim theatre and long-form improvisation.

For budding playwrights, there was an indispensable career guide, Being a Playwright, from the team behind new-writing theatre company Papatango, destined to guide and inspire a new generation of playwrights. 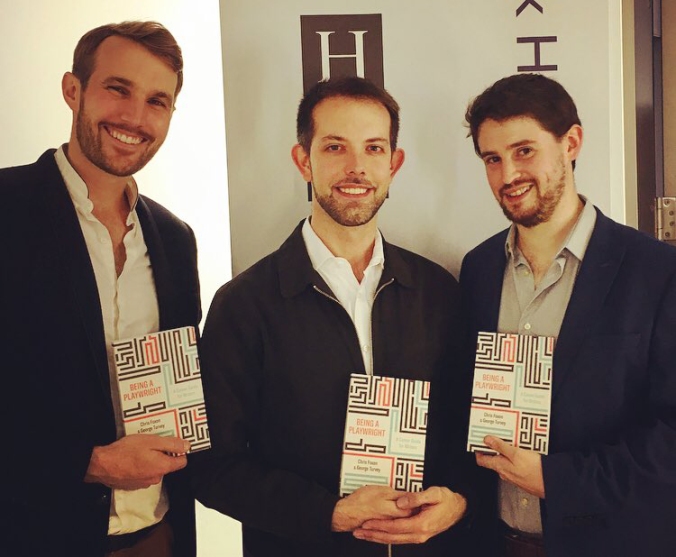 In July, we published 30 Years / 30 Plays, a fabulous book of postcards featuring a selection of covers from some of the most successful plays published by NHB over our first thirty years.

Copies quickly sold out at HQ, though there may still be a few available from other retailers.

Also in July, we joined many of our authors and friends for a party at the Royal Court Theatre, to celebrate the anniversary of the company’s launch in July 1988. There were speeches from NHB author Jack Thorne (whose completely delightful speech is reproduced on our blog here) and the Artistic Director of Kiln Theatre, Indhu Rubasingham, as well as from NHB Publisher Nick Hern and Managing Director Matt Applewhite. It was wonderful to bring together some of our newest authors with those who have been with Nick Hern Books since the very beginning. 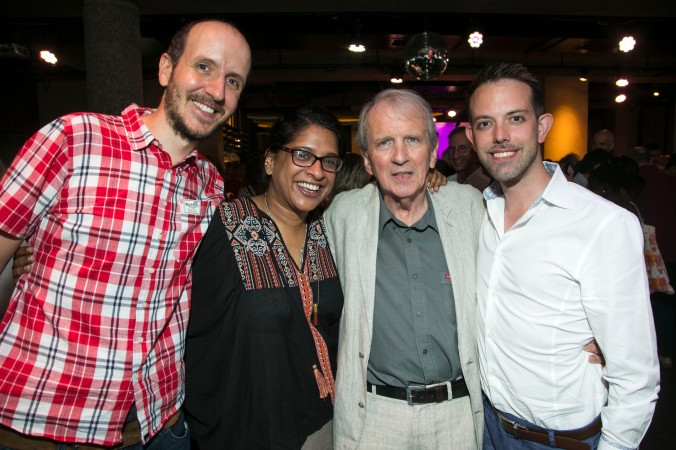 On 8 September, a capacity crowd gathered at The Questors Theatre in Ealing for an all-day event of talks, workshops and performances focussing on amateur theatre. Taking part were over four hundred actors, directors, producers and many others involved in amateur theatre up and down the country. Highlights included the keynote speech from actor and NHB author Simon Callow, interviews with NHB playwrights Jez Butterworth, Amanda Whittington and Mike Bartlett, and masterclasses from actor Oliver Ford Davies, director Stephen Unwin and fight director Roger Bartlett. Thank you to everyone who came and made it such a success!

Nick Hern Books is one of the UK’s leading licensors of amateur performing rights, and we look forward to helping more amateur drama and youth theatre groups find their perfect play to perform, over the years ahead.

We staged a panel event at the National Theatre on 8 November with NHB playwrights Howard Brenton, Conor McPherson, Alecky Blythe and Natasha Gordon, to explore how playwriting has – and hasn’t – changed over the 30 years of Nick Hern Books. It was a lively event, attended by many budding and emerging playwrights, who came away full of hope and inspiration, even if there was a consensus that playwrights still face daunting challenges when it comes to making a living from their work.

Over the course of the year, we published a series of Anniversary Interviews with some of our leading authors and playwrights, specially commissioned for our blog. Launching with Harriet Walter on the unique challenges facing actresses, particularly in finding mature roles for women in the Shakespeare canon, the series included interviews with playwrights Rona Munro, Lucy Kirkwood, Jack Thorne and Howard Brenton.

Drawing the series to a close this month, NHB’s Publisher Nick Hern and Managing Director Matt Applewhite reflect on the company’s thirty-year history, and what lies ahead. Catch up with all the interviews, over on our blog.

Thank you to everyone who has come along to one of our events this year, or who has bought a book from us. We look forward to seeing more of you in the next thirty years. But for now, have a very happy Christmas, from all at Nick Hern Books. 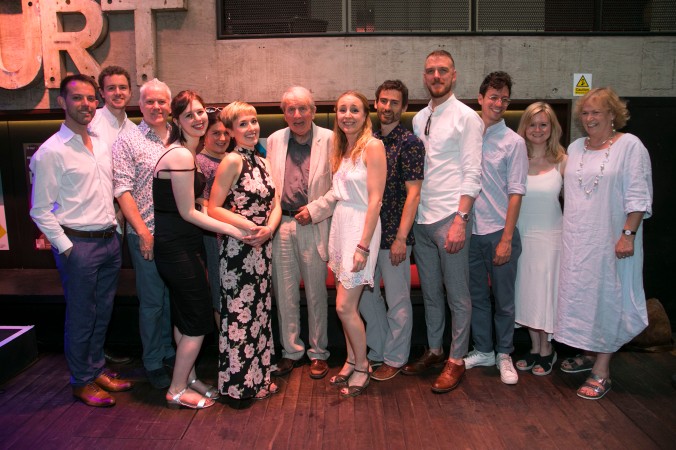